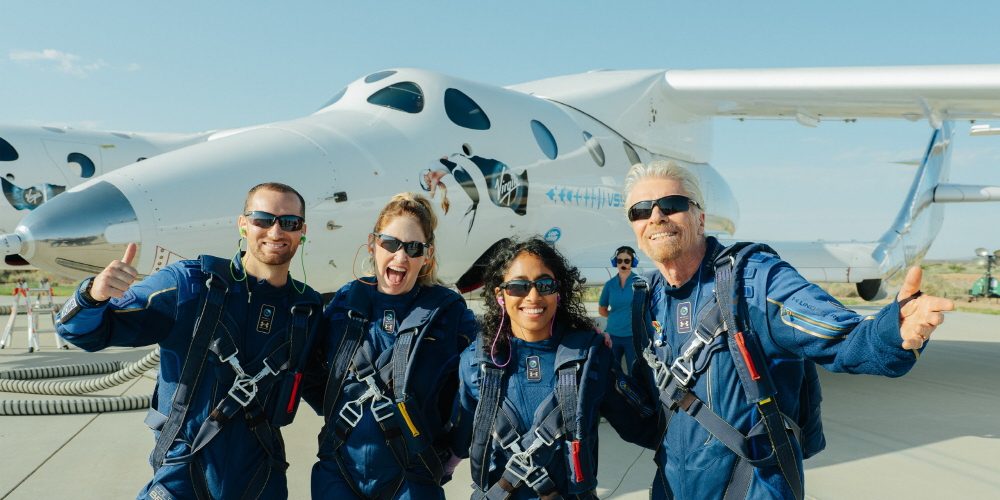 Virgin Galactic made its first space flight on July 11 (local time) with Virgin Group chief Sir Richard Branson aboard. But Blue Origin, led by Amazon co-founder Jeff Bezos, appears to be unhappy with this space travel.

According to Blue Origin, a space flight using the SpaceShipTwo on which Sir Branson was boarded should not be said to have gone to space. As a basis, it presented a performance comparison of SpaceShip Two and its own space rocket, New Shepard, and emphasized that the Virgin Aircraft does not reach the Karman Line, which is 100 km above sea level.

The Karman line is a boundary of 100 km, and the FAI of the International Aviation Federation defines this as the Earth’s atmosphere and the altitude above this as outer space. In this regard, Virgin Galactic’s Spaceship Two, in which Sir Branson boarded, is based on an altitude of 80 km.

Blue Origin also said that the New Shepard launches a capsule-type spacecraft from a rocket, while the Spaceship Two is nothing more than an aircraft flying at a strictly high altitude. Meanwhile, New Shepard says it has the largest windows of any spacecraft.

Then, if you ask if SpaceShipTwo flight is space flight, it can be called space travel. Since the U.S. Air Force and U.S. authorities, such as the National Aeronautics and Space Administration (NASA), define outer space above the altitude of 80 km at which aircraft cannot be controlled using air, when they reach an altitude beyond this line, SpaceShip Two will also enter outer space. can fly

When discussing using different standards, it is natural to have different opinions. However, Blue Origin is not sure if this is a condition. Even when Virgin Galactic conducted a space passenger flight by boarding an astronaut as a passenger on a SpaceShip Two test flight in 2019, Bezos said at this time that the altitude of 90 km is not outer space, and its rocket has already been used. It boasted that it reached an altitude of 108 km.

Blue Origin announced in early June that it would make its first space flight on July 20, aboard Amazon co-founder Jeff Bezso. However, since then, Virgin Galactic has set the first flight with Sir Branson on July 11th.

The flight with Sir Branson was a test flight for Virgin Galactic, but Blue Origin’s first commercial space tourism flight by a private company, as at least one passenger is a civilian who purchases a high-priced ticket. Wouldn’t it be better to appeal to this aspect rather than height or window size?

In addition, Theodore von Karman, the aerospace engineer who calculated the Karman line and the first director of NASA’s Jet Propulsion Laboratory, in his book (The Wind and Beyond), revealed that there is no air that creates lift at an altitude of 82 km or more. There is a theory that it was the Karman line that made the distance 100 km.

In 2018, Dr. Jonathan McDowell of the Harvard Smithsonian Center for Astrophysics, in his paper (The Edge of Space: Revisiting the Karman Line), found that the lowest altitude at which an elliptical orbiting satellite can maintain its orbit is around 80 km. Based on this calculation, it also shows the possibility of examining the definition of outer space from 100 km to 80 km.