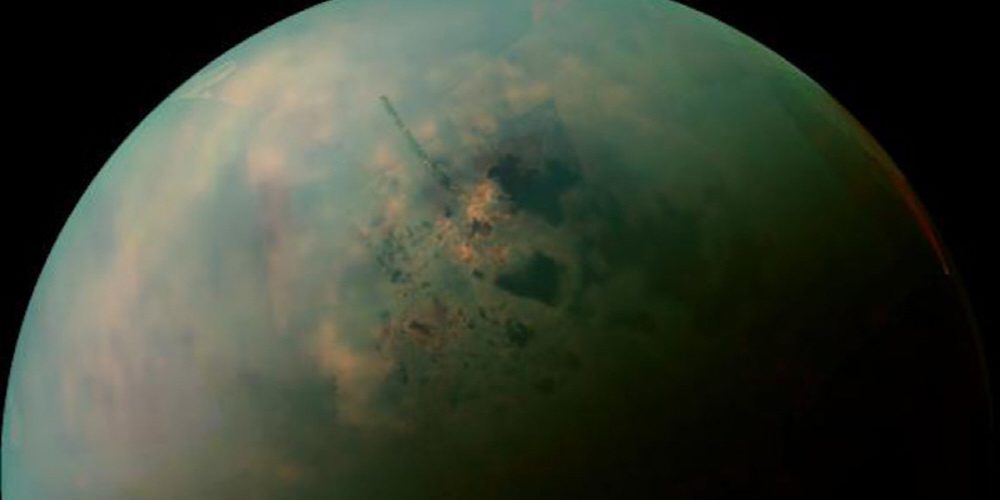 A 300m deep sea of methane on Saturn’s moons…

Saturn’s moon Titan has an ocean of liquid methane, not water. Only Earth and Titan are known in the Solar System for liquids on the Earth’s surface.

Methane on Earth is a colorless and transparent gas known as city gas or greenhouse gas contained in livestock trim. However, on Titan, where the surface temperature is -180 degrees Celsius, it exists mainly as a liquid and is full of seas and lakes. Then, methane evaporates from the ocean of liquid methane, is absorbed into the atmosphere of Tita, and becomes condensed, clouded, and methane rain is poured onto the ground. Like the water cycle on Earth, the hydrocarbon cycle is taking place on Titan.

Recent studies have shown that the depth of the Titan sea reaches 300m. NASA is planning to send submarines to methane seas in the future.

Although 65 Saturn satellites have been discovered, the largest Titan of them is 5,150 km in diameter. Mercury greater than 4,850 km in diameter. In addition, Titan is covered with a dense atmosphere, so it can be expressed as planets and satellites in terms of size and atmospheric concentration.

The main components of Titan’s atmosphere contain about 2% nitrogen and methane, just like Earth. Observing the earth’s surface can be quite difficult, as methane and nitrogen in this atmosphere cause chemical reactions to form high molecular organic compounds.

This is the NASA Cassini probe. Launched in 1997, it took Saturn in orbit in 2004, and has diligently collected clear observations of Saturn and its satellites until 2017. The ESA small rover on Cassini, Huygens, was separated from Cassini and landed on the surface of Titan.

Cassini also included an altimeter, but on August 21, 2014, it approached only 970 km from the surface of Titan and radiated radar into the Kraken Mare for observation. The Kraken Sea is Titan’s largest body of water and holds 80% of the Titan’s surface liquid.

A new study that measured the depth of the Kraken sea based on Cassini’s data was recently published in the journal Journal of Geophysical Research. According to this, the deepest part of the Kraken Sea may be more than 300m deep. Looking at how Cassini used radar radiation to measure the depth of the Kraken sea, a technology jointly developed by Cornell University and the NASA Jet Propulsion Research Institute is that radar calculates the parallax reflected from the sea level and the seabed, and determines the distance between the sea level and the seabed as sea depth. will be. However, this method was done after assuming a number of uncertainties, such as the nature and density of the liquid filling the Kraken Sea, and at what speed the radar will pass through.

Using this technique, the depth of the water at the northern end of the Kraken Sea (Moray Sinus) was measured and found to be 85m. In addition, it was confirmed that 70% of the sea area was methane, 16% nitrogen, and 14% ethane from the radar transmittance. The research team believes that the composition will be uniformly distributed throughout the Kraken Sea.

I also measured the depth of the Kraken Sea, and this result is uncertain, but when Cassini launched a radar into the Kraken Sea, there was no evidence of radar reflection from the sea floor, so the liquid filling the Kraken Sea was too deep or too absorbent to penetrate the Cassini radar It was revealed that it was suggesting a possibility that it could not have been possible. However, it is believed that if the liquid composition is uniform throughout the Kraken Sea, it may be about 100m shallow and 300m deep.

As previously stated, NASA plans to send a submarine probe to Titan to remotely explore the Kraken Sea. This work will make it possible to more accurately determine the density of the Kraken’s ocean liquid, and in the future, it is expected that the degree of sound waves will be more accurately adjusted. Related information can be found here .