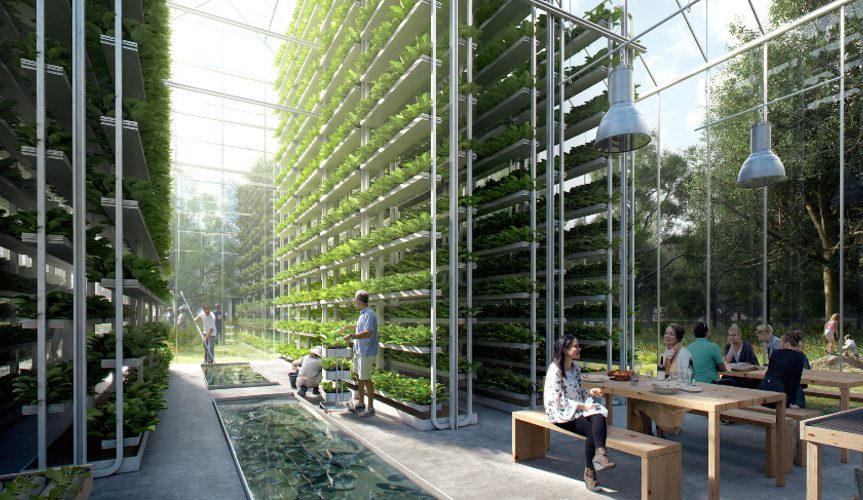 Vertical farms contain the idea of growing crops vertically using tall skyscrapers. It is also one of the solutions that have been in the spotlight a few years ago as the world’s population grows and the food crisis is concerned.

Recent research suggests that such high-tech farms could revolutionize global wheat production. Wheat is the world’s most widely grown crop. People around the world consume large amounts on a daily basis, accounting for 20% of the average meal calories and protein. What inevitably needs to increase production more than now.

However, the cultivated land is limited. Therefore, you can expect a vertical farm that grows crops in a vertical stack. According to a study published in the Proceedings of the National Academy of Sciences, two 10-story vertical farms were used to reproduce the environment set for optimal artificial lighting, temperature and carbon dioxide levels for crops. Simulations show that it can now produce 1,940 tonnes of wheat per hectare per year. Currently, wheat yields average 3.2 tonnes per hectare per year. Just by looking at these figures, you can understand why you are working on vertical farm research.

Around the world, 1 in 9 people already face hunger. If the population grows like this, the problem can become even worse. It is said that more than 60% more wheat production is needed worldwide to prepare for this situation. This is a very difficult problem. This is because even today, global crop yields tend to decrease due to environmental changes caused by warming and climate crisis.

The verification results presented by this study can feel like a line of hope for this problem. However, at this point, it is a simulation to the last, so there may be parts that you do not know if you do not actually try to see what barriers to growing wheat.

There are also areas that are obvious at this stage. This is a huge cost. Considering that it is different from conventional farming methods, in addition to consuming huge amounts of energy, artificial lighting systems are also required. However, according to the authors of the paper, the simulation system can obtain 30-50% light intensity than that directly received from the sun.

Meanwhile, the water supply system or technology in such an indoor environment is not only expensive to maintain the optimum temperature and air quality, but also can lead to environmental impact depending on the power supply method. Previous investigations have suggested that powering these systems may require significantly more energy than current high-emission systems.

One expert said that there have been no attempts to grow crops using artificial lighting as strong as the sun. The reason is simple, but because it requires too much energy. The authors of the paper say that electricity costs are falling and lighting is being efficiently improved through recent solar power generation. However, crops grown using vertical farming methods are still unlikely to compete economically with the market prices of current crops. Another expert said that although it was calculated 10 years ago, considering the amount of light that wheat needs to produce a pound of grain, growing all of the wheat crops indoors in the United States would consume eight times the country’s annual electricity. Even if lighting technology is further developed, it is said that by now, the total power supply in the United States will be 4 to 5 times.

Of course, the paper author points out that the cost of vertical farming can be further reduced by automation innovation. Regarding this, of course, the issue of wage cuts for agricultural workers can be reversed. In any case, vertical farming has been shown to increase wheat production efficiency hundreds of times, but it also admits that there are currently unexplained parts such as nutrition, quality, and possible diseases of wheat grown indoors. Another is that even if a vertical farm works well, it does not solve all human agricultural problems. The problems surrounding modern dietary life need to be aimed at the same time as systematic changes in other areas, such as reducing various food wastes, moving away from meat-oriented agricultural systems, and improving crops and soil. Related information can be found here .