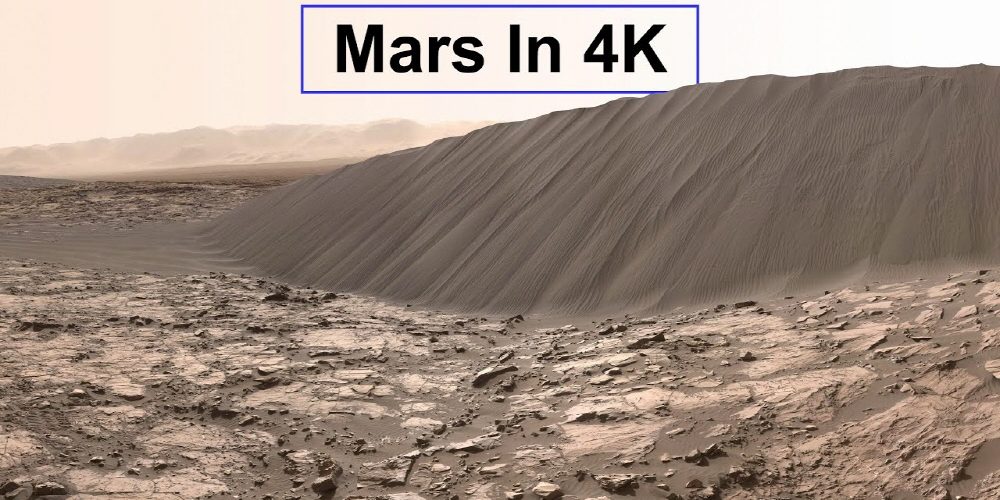 NASA is sending probes like Opportunity and Curiosity to Mars. These probes regularly sent images of Mars to Earth. A video that summarizes the ultra-high-definition images created by NASA by attaching these pictures of Mars together attracts attention.

The Gale Crater, photographed by Curio City, which has been exploring Mars since 2012, is 154 km in diameter. It appears to have been formed between 3.8 billion and 3.5 billion years ago. The name Gale comes from Walter Frederick Gale, an amateur astronomer who observed Mars in the 19th century.

In the center of the crater of the game is Mount Aiolis (Aeolis Mons) reaching 5,500m above sea level. The following is a photograph of the Rub’ al Khali desert taken by Opportunity in 2005. Opportunity’s own footprint is also clearly stamped. Taken 2km south of the crater, nicknamed Purgatory Dune. For reference, the name Rub-Al-Hali is derived from the largest desert on Earth, which occupies a third of the southern part of the Arabian Peninsula.

Next comes the Meridiani Planum, which is located near the equator of Mars. It is said that the plains are likely to have been filled with high salt and acidic liquids for a long period of time. In addition, Cape Verde, located on the edge of the Victoria Crater in the plains, is also where the undulating land was filmed. Cabo Julio, which is adjacent to this place, is derived from an earth name discovered by Magellan during his voyage around the world, known as the discoverer of the Strait of Magellan.

The Santa Maria Crater (Santa Maria) is a name derived from the Santa Maria ship that Christopher Columbus embarked on while sailing the Atlantic Ocean. You can see the pictures painted to make it easier to understand the differences in materials such as rocks and soil.

In addition, in the case of the Marathon valley, which Opportunity surveyed over a period of one year and two months from July 2015 to September 2016, you can see the barren land spreading to the horizon.

John Klein, the rock Curiosity first drilled, contained iron sulfur, and the NASA concluded that microbes were likely to be born. The name John Klein is said to be the name of a senior mission investigator who died in 2011.

In addition, the Glen Torridon region from the Scottish name of the same name, the rocky expedition to Curio City to the region rich in sulfates, Pilinger Point, where you can see the entire Endeavor Crater 22 km in diameter from the four sides, originated from the same name as Earth. There are also Namib Des., Burns Cliff, and Yellowknife Bay located in the Gale Crater. Yellowknife Bay was explored by Curiosity, and it was confirmed that water may have existed at one time.

In addition, the Vera Rubin Ridge, which Curiosity has been searching for for more than a year, is named after the American astronomer Vera Rubin, who revealed the existence of dark matter in the results of observations of the rotational speed of the Andromeda Galaxy.

The camera installed by Curiosity is high-performance, but the communication speed with the Earth is only 32 kilobits per second, so 4 kilobytes, except for 8 minutes a day, so it is impossible to broadcast Mars live. Almost nothing moves on Mars, so sending a picture might be better, of course.