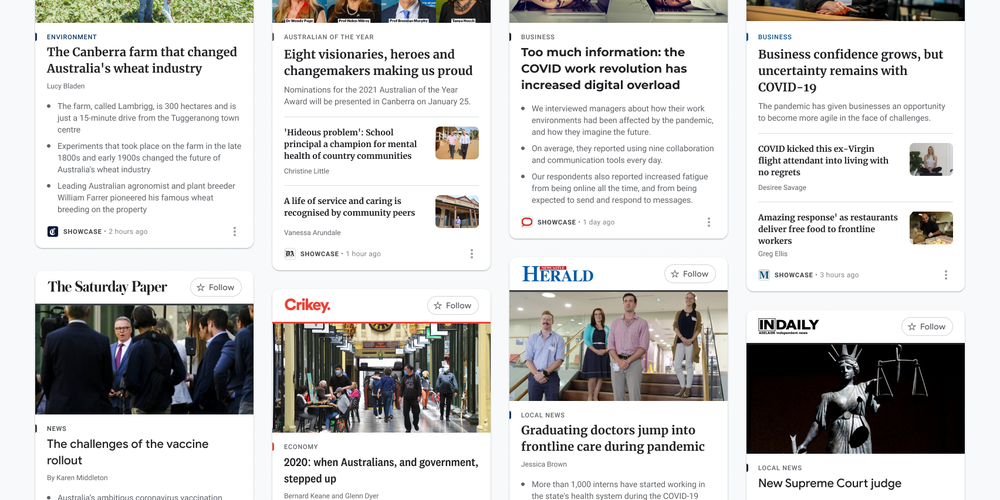 On February 4th (local time), Google announced that it will launch a Google News Showcase in Australia to deliver news in cooperation with the media. Google has expressed its intention to withdraw services such as Google search from Australia in response to the Australian new law mandating that news usage fees be paid to media companies in January.

Previously, Google has been criticized for extracting article information from news sites and generating significant advertising revenue from it, and there have been voices of complaining among news publishers. Accordingly, the Australian government has enacted the News Media Bargaining Code, which mandates distributing revenue from news content to media, the source of content rights.

In response to this move, Google rebelled against the fact that people would not be able to obtain information for free or inexpensively, and from August 2020, conflict with the Australian authorities, including pop-ups on Google search pages in Australia that the use of Google is at risk It was getting deeper.

The confrontation between Google and the Australian authorities intensified in 2021, and Google announced on January 22 that it would stop providing search services if the law mandated payment of media content usage fees. Microsoft, which was far behind Google in the search market, has suggested to Australian authorities that Bing can be prepared as a substitute in Australia.

Meanwhile, on February 4, Google announced that it would update its official blog and launch a Google News Showcase in Australia. Google News Showcase is a framework for delivering articles after officially partnering with the media. Through this, Google is paying a billion dollar article fee to news publishers. At the time of its announcement in October 2020, it was only deployed in Germany and Brazil, but the target regions have since expanded to countries around the world, including the UK, France, Canada, and Argentina.

Google said in a statement that it has worked closely with Australian news publishers to develop the Google News Showcase. In addition, Google Australia’s official Twitter account emphasizes fairness as it is convinced that Google News Showcase is a fair and practical way to support and grow the Australian news industry at the highest level of existing investment in reporting. .

It hinted at the withdrawal of Australia, but there is increasing opinion among reporters that it shows that Google has softened the attitude of the Australian authorities about the launch of a Google News showcase within less than a month. One media pointed out that the Google News showcase doesn’t mean that the issue has been resolved, or that the company has decided to comply with Australian new laws, but that it can be seen as an indication that it is ready to take a step and negotiate a royalty agreement. In addition, it is an opinion that it is remarkable with an exquisite timing that the news showcase was started immediately after threatening to withdraw from the market. Related information can be found here .