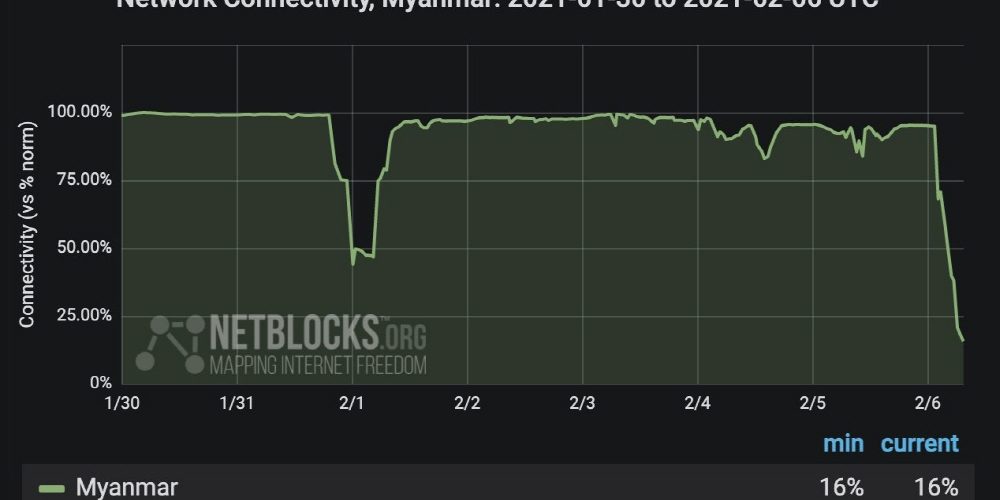 In Myanmar, where the military took power in a coup, the Ministry of Transportation and Communications blocked almost all domestic Internet communications. It is said to be aimed at blocking the demonstrations through the Internet by the supporters of the National Democratic Federation’s NLD, who won the parliamentary elections in November 2020 with overwhelming support.

In Myanmar, there were reports that on February 5th, the state ordered to block the Internet to calm the ethnic conflict and restored access, but on the 2nd at the time, about the two days of military opposition to the coup blinded the public.

Myanmar’s forces have been wary of protests and protest appeals by blocking the Internet almost everywhere, and blocking the influence of popular politicians. It blocked access to Facebook, Messenger, Instagram, WhatsApp, and Twitter through the MPT line, a major company.

The Ministry of Transport and Communication in Myanmar argued that such SNS is inciting violence against the people. However, even if the SNS is blocked, it seems that the scope has been further expanded because the public protests continue. It is known that the Ministry of Transportation and Communication instructed the communication service provider to continue blocking the Internet on the 7th. It can be seen that the attempt was made to prevent large-scale protests on the weekend.

Blocking the Internet as public protests continued is a tool that has been used by the powerful in countries such as Iran and Egypt so far. However, there are still many cases where protesters find a way to technically get out of regulation, and blockade, on the contrary, amplifies their antipathy against the power class.

Some have pointed out problems related to the operation of the existing regime, such as delays in responding to the Rohing refugee issue, but there are reports of China’s breath behind the coup by the military. The people of Myanmar, who are in a complicated situation, may try to revive their activities in other ways even if the Internet is blocked. Related information can be found here .