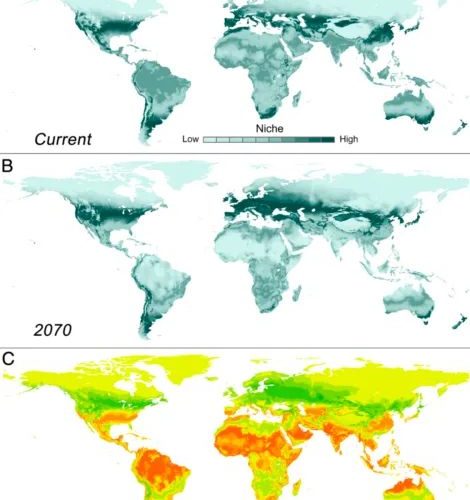 New research suggests that if carbon emissions are not suppressed, extreme heat, which is still only a part of the Sahara Desert, could spread to 20% of the planet, where a third of humans live. This paper, published on PNAS, presents compelling data for reducing carbon dioxide emissions.

The team used historical data up to 6,000 years ago to estimate the climatic conditions that would cause people to migrate. According to this, the biggest factor limiting the survival of humans who have adapted to all types of soil with all levels of precipitation is heat. Research shows that people live in a narrow temperature range of 11 to 15 degrees per year on average. This region, where our staple food crops grow best and livestock productivity is high, is defined by the research team as a human climate gap, a place with a climate suitable for humans.

Unfortunately, due to climate change, the unbearable heat for millions of people is losing productivity and the world is suffering from heat waves. Nevertheless, mankind has somehow lived in incredibly hot places from Phoenix, Arizona to New Delhi and Dubai. But one day, climate change may change this.

The study modeled what would happen to the human climate niche at the end of this century, using the scenario RCP8.5 in which carbon emissions are extremely high. As a result, the small climate gap is further narrowed. The Sahara Desert is one of the places where the annual average temperature exceeds 29 degrees, marking the end of the human climate gap. However, only 0.8% of the world’s land is hotter than the Sahara.

However, it is said that by 2070, the places where such heat is rising can expand to around 20% of the land. The 3 billion people living in this area may need to move elsewhere. It is to live in an environment where it was difficult for humans to live for a year in the past. In addition, the rapid rise in temperature over the next 50 years can face a dramatic situation that has never been experienced in the past 6,000 years, when human civilization was the most prosperous.

On the map, the red part of the lower map is the area where survival is difficult. This is the case in Brazil, the Middle East, and most of India. Areas with many poverty classes are hit hardest, but they are not limited to developing countries. The southern United States, Australia and some European Mediterranean regions are also expected to be exposed to heat that cannot be called adequate temperatures. It may actually happen that scientists in the past have said that by the end of this century everyone might want to migrate to Siberia.

Catastrophic movements can certainly happen in hot regions where temperatures rise so much that humans cannot live unless greenhouse gas emissions are curbed. Even if this doesn’t happen in 2070, a similar phenomenon already occurs in some areas beyond the human climate gap. The findings of this study, above all, tell us that we should start reducing our emissions now. Related information can be found here .