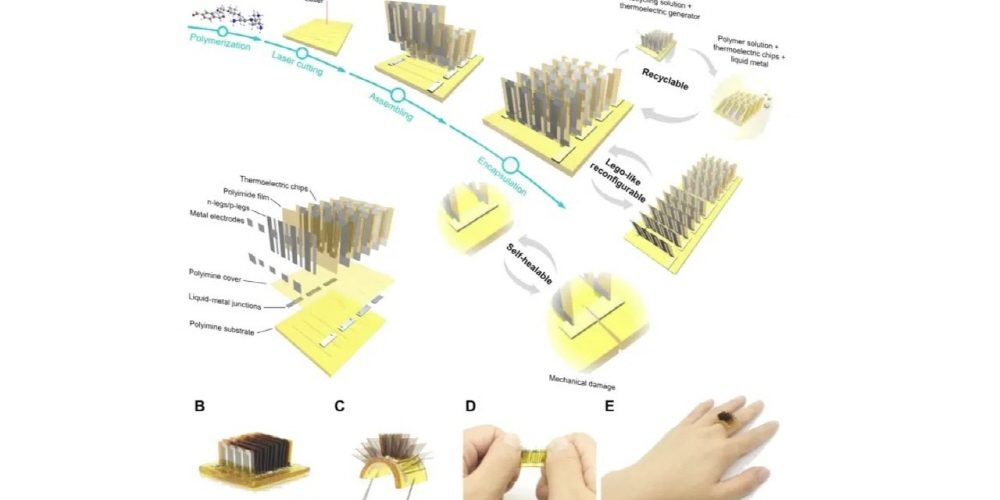 Turning the human body into a wearable battery?

It has developed a wearable concept for a thermoelectric power generation device that is fully recyclable with elasticity and automatic recovery function. Using this concept, the day may come when the wearer himself will power the IoT.

According to a paper published in the journal Science Advances, the research team succeeded in creating a flexible mechanical structure by combining liquid metal wires with thermoelectric module chips. In other words, the concept of a device that can be relocated to multiple architectures as well as self-recoverable by mounting a chip on a highly elastic material was created. In addition, a circuit voltage of 1 volt per 1 cm² is realized.

In short, it is possible to collect heat and obtain a large amount of power. Even if it is not a hard solid material, there is no worry about durability. What’s great about thermoelectric generators is that they can generate electricity by collecting energy from heat. If this is realized, the device can be greatly improved.

In theory, using thermoelectric technology, it is also possible to power the device by converting body temperature into electricity. Of course, the need for charging itself disappears, and this can solve all the problems of wearable batteries such as smartwatches only in theory.

Of course, just a wearable device or an internal sensor requires more electricity than the current thermoelectric generator can produce. This is the problem. Moreover, smartwatches and wearables can be exposed to harsh environments. An act like washing dishes while wearing a smartwatch is not friendly to electrical appliances.

Until now, it is the norm that thermoelectric generator chips are hard and brittle, but the fact that the research team invented a method to put the chips in a flexible material is a big leap forward. Also, if you wear 6×25cm, you can produce 5 volts of power just by walking. It is explained that this is enough to directly drive a low-power sensor node for radio frequency communication. Although it is still in the beginning, it has become a feasible start.

But what’s more amazing about this development is that the device self-healing. Since liquid metal wiring is used, even if damaged, in 90 minutes, the two parts can be connected to restore conductivity. In a sense, the device can be cut and reconnected in various configurations.

In addition, the device can disassemble individual components simply by immersing them in a specific solution. It is also possible to use this solution to make a new polyimine film and to create a thermoelectric device again. This is interesting in terms of reducing electronic waste. Currently, batteries are not environmentally friendly, and wearable manufacturers are forcing customers to upgrade, which is not necessary, once every 1-2 years. Some manufacturers are introducing programs for smartphones and speaker goods, but many of them are not so for fitness trackers and smartwatches. This invention not only reduces dependence on batteries, but also has advantages in terms of recycling, so in the future, the era of reusing components by recovering the wearables used by manufacturers may come.

Of course, the research is still in its infancy, and it is not a stage that can guarantee whether wearable manufacturers will adopt it in consumer products. To reach implementation, it must be a cost-effective, scalable, and user-friendly device. However, it is certainly worth further research in the future. Related information can be found here .