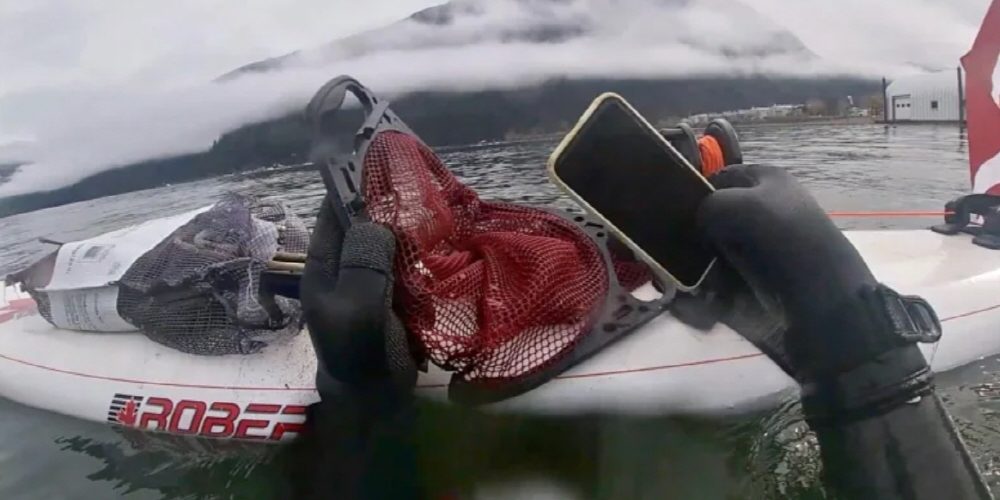 An iPhone sunk in a lake found in half a year

It is emphasized that the iPhone 11 is IP68 certified and has water resistance from 2m to 30 minutes. However, there is news that it has surpassed these limits and survived after being submerged for half a year.

Canadian divers Clayton Helkenberg and his wife told local media that they found the iPhone 11 by diving into Harrison Lake in search of lost items. At the same time, the phone he found was not badly damaged and turned on as soon as the stain was wiped off.

He took out the SIM card from the iPhone 11, put it in another phone, got the phone number, and contacted the owner. The owner is a man who lives in Vancouver, and he dropped his iPhone in the water while riding a boat in September last year, half a year ago. The iPhone 11 says the microphone is damaged and the speaker sounds a little weird, but everything else works perfectly. The battery’s maximum capacity is 96%, and flood damage was hardly noticeable.

This is not the first time that the iPhone has come alive from the crisis of despair. After falling 60m from an airplane, it survived more than a year, or a video of falling while diving 300m has been released. However, it was the case that the place where it fell was not a rock but a soft sandy beach, and this is the first time that it was found after sinking to the bottom of the lake and enduring for a considerable period of time. Related information can be found here.

Meanwhile, news was reported that a man who fell into the river due to the splitting of ice was exposed to the risk of hypothermia and saved his life thanks to the Apple Watch. A man named William Rogers, who lives in New Hampshire, USA, is an ice skating teacher, but he fell out when ice cracked in a local river. I quickly escaped and put my weight on the ice, but I recall that I was scared of the feeling of sinking in the water as it broke more and more.

There was nobody around, and while I spent a few minutes in the water with my smartphone untouched, my hypothermia began. He suddenly recalled that he was wearing an Apple Watch. They immediately contacted 911 on the Apple Watch and eventually saved their lives. On the phone he said that he would be forced to do it in the next 10 minutes, but the firefighters arrived within 5 minutes.

The Apple Watch is equipped with an emergency SOS function. You can automatically call local emergency services by pressing and holding the side button. In the past, another man drowned in the river saved his life by seeking help through this function.

The iPhone also has an emergency SOS feature, but it can be difficult to get out of the water or out of reach. In contrast, the Apple Watch on the wrist can send an emergency SOS with just one button.