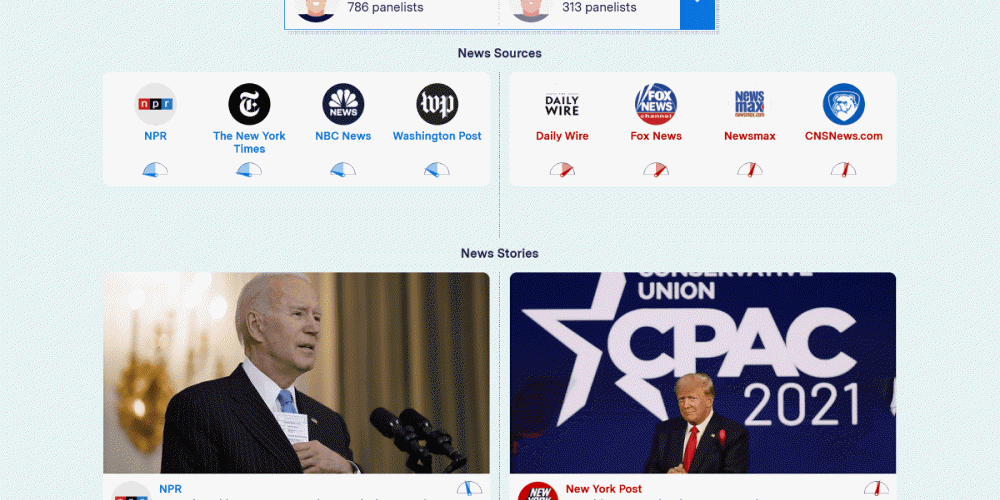 SNS such as Facebook and Twitter post appropriate to individual users or introduce groups according to an algorithm, but it is pointed out that this structure accelerates the division between people. The Markup, an American non-profit organization, has unveiled Split Screen, a tool that allows you to realize how the content displayed in your Facebook feed varies according to party support, gender, and age.

Facebook provides 2.7 billion users with news, advertisement posts, recommendation groups, and more, each tailored to their taste. This structure is important for attracting users to the platform, but it is also criticized for accelerating polarization by blocking information and creating filter bubbles for each addict. In fact, it’s not easy to know which feeds are being delivered to users with different interests than you.

Markup collected Facebook feed information from December 1, 2020 to March 11, 2021, as part of the Citizen Browser project targeting more than 2,600 Facebook addicts living in the United States. In order to protect participants’ personal information, Markup deleted personally identifiable information such as usernames, friends’ names, and photos, and instead grouped users by age, gender, race, place of residence, and party support according to self-report.

The split screen shows how Facebook feeds differ by party, gender, and age based on the data collected in this way. Upon accessing the official site, participants will be identified as those who voted for Joe Biden and those who voted for Donald Trump in the 2020 U.S. Presidential Election, delivered to their Facebook feed for two weeks from February 24 to March 11, 2021. You can see the content difference.

If you look at the difference between the displayed news sources, you can see that Biden supporters are provided by NPR, The New York Times, NBC News, and the Washington Post, while Trump supporters display a lot of Daily Wire, Fox News, News Max, and CNS News.com. Among them, the frequency of displaying progressive tone media such as NPR and The New York Times is quite skewed.

In individual news, Biden supporters tend to have a lot of corona 19 and vaccine-related content, while Trump supporters display news that Trump has spoken at the CPAC of the Conservative Political Action Committee. In addition, if you look at the difference in hashtags, Biden supporters have women-related hashtags (#internationalwomensday, #womenshistorymonth, #iwd2021) and Golden Globes (#goldenglobes), and Trump supporters display the best gifts for their families (#best_family_gifts).

What you can see on the split screen is not only the difference in Facebook feed content between Biden and Trump supporters, but also differences by gender and age. Of course, the split-screen sample does not accurately reflect the entire US population, nor does it accurately reverse engineer the Facebook recommendation algorithm. In addition, it is true that there is a bias in the content delivered to a specific group, but this is not necessarily due to political thoughts, gender, or age, but it is also revealed that it may have been influenced by connected friends and actions so far. Related information can be found here.