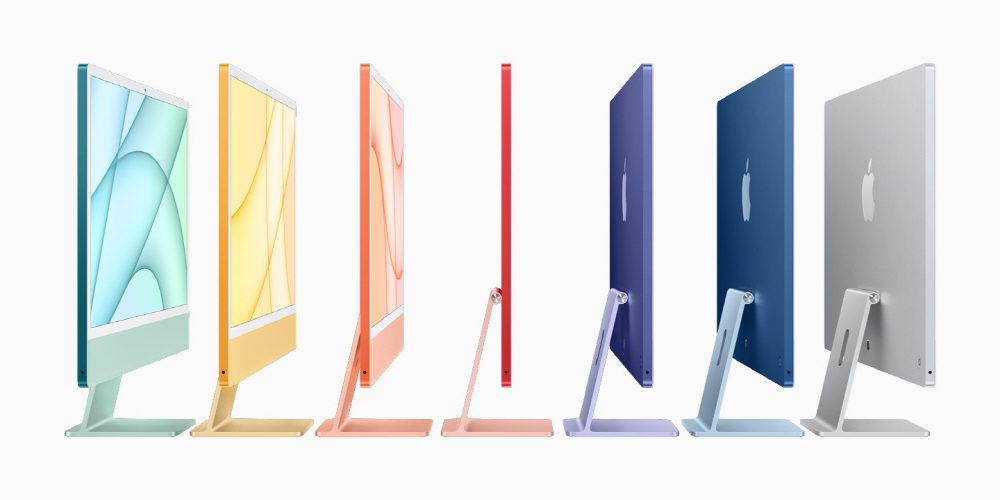 IMac·iPad Pro… Apple on the front of the M1

Apple held its first Apple event in 2021 on April 20 at 2 o’clock. On this day, Apple announced the iMac and iPad Pro based on the Apple Silicon M1 chip, while also announcing the Air Tag, Apple TV 4K, iPhone 12 purple color additional models, and the Apple Card family for tracking lost items.

First, the new iMac is the first Mac designed based on the M1 chip, and all parts including the body performance and design, display, camera, speaker, and microphone have been changed. The most eye-catching thing is that it has a thin and sophisticated design thanks to its M1 base. Unlike models equipped with Intel chips, the M1 is a one-chip CPU and GPU to significantly reduce the size of the logic board to achieve a much thinner size.

In fact, the existing system had a thick logic board and heat sink to cool the CPU and GPU, but the new one replaced it with two small fans on both sides of the M1-based logic board. It is explained that the total volume of the iMac has been reduced by 50% and the thickness has been reduced to 11.5mm.

In addition, the performance per power is also improved, and the noise is less than 10dB based on normal use, realizing low noise, almost fanless. The display is also slightly larger than the existing 21.5-inch model by reducing the width of the bezel, but it supports Retina 4.5K, which supports a resolution of 4480×2520 on a large 24-inch screen.

The performance was greatly improved by changing to the M1 base. According to Apple, the new iMac is 85% faster than the previous 21.5-inch model, and the GPU is twice as fast as before. In addition, it is 50% faster compared to the 21.5-inch existing model with a separate graphics card. For machine learning, it’s three times faster.

This product comes with a 1080p facetime camera, a 3-microphone array, and a 6-speaker system. The microphone also reduces noise during conversation with beamforming, and the speaker supports spatial sound, and you can enjoy it with Dolby Atmos.

It has 4 USB Type C terminals and also introduced 3 types of Magic Keyboard, including models that support Touch ID. It explains that the Magic Keyboard uses wireless TouchID and keyboard-only security components to directly communicate with the M1 chip (Secure Enclave) on the iMac side to completely protect the fingerprint data by encrypting it. This allows the iMac to unlock using fingerprints as well as secure Apple Pay shopping, and TouchID supports Fast User Switching, allowing multiple users to switch to a dedicated user profile by pressing their fingers. Pricing starts at $1,499 and launches at the end of May.

The iPad Pro also has an M1 chip. The design itself is not very different from the existing iPad Pro, and the model is divided into 11 inches and 12.9 inches. Of course, the contents are equipped with the M1 chip that was adopted in the MacBook Air and MacBook Pro, and the graphics function has been greatly enhanced.

In fact, according to Apple’s explanation, the M1 chip-based 8-core CPU has increased performance by 50% compared to the previous one, and is 75 times faster than the initial iPad. In the case of GPU, the graphics performance has been increased by 40%, and compared to the first generation, the difference is a whopping 1,500 times.

In addition to that, the iPad Pro has up to 2TB of storage space, and the storage space access speed is 2 times faster than before.

The display adopts Liquid RetinaXDR (Liquid RetinaXDR) consisting of 10,000 mini LEDs that support a contrast ratio of 1 million:1 and 1,600 nits of brightness, and a lidar is also mounted on the rear camera.

The Liquid Retina XDR was installed only on the 12.9-inch model. The mini LED display is a technology that allows the light off for each part by combining the existing LCD and backlight combination with the existing LCD and backlighting and dividing the backlight into fine LEDs and combining it with local dimming technology. As previously stated, more than 10,000 mini LEDs are used, and the entire screen has a maximum brightness of 1,000 nits, a peak brightness of 1,600 nits, and a contrast ratio of 1 million:1. Thanks to this, even the brightest areas and finest details in the darkest images can be captured. It explains that creators, such as photographers and video makers, can view and edit real HDR content with a large screen display anywhere.

In addition, it supports 5G wireless communication in addition to the Thunderbolt interface, so you can expect a download speed of 3.5 Gbps, and in an ideal situation, 4 Gbps. Millimeter waves are also supported.

The performance has been improved, but the thickness is 6.4mm and the weight is 500g, making it thin and light. In addition, it is equipped with an ultra-wide camera, supports a 12-megapixel sensor and a 122-degree angle of view, and supports functions such as a center stage that always keeps a specific person in the center through machine learning. Prices start at $799 for 11-inch and $1,099 for 12.9-inch and will be released at the end of May.

Apple also officially announced AirTag, which was rumored to be the same day. AirTag is a Bluetooth-enabled tracker that competes with places like tiles. Samsung Electronics also introduced the Galaxy SmartTag a while ago.

AirTag can be searched in Fine My on iOS devices, and its location can be found through AR displays using Precision Finfing on devices equipped with U1 chips among the iPhone 12 series. The tag itself is also equipped with a speaker, so you can find it by sound. In line with the product announcement, Apple also announced that it will expand the Find My network, allowing you to find third-party products in addition to existing iOS devices through Find My.

The air tag is IP67 waterproof and dustproof, the battery life is 1 year, and the battery can be replaced by the user. When purchasing from the Apple Store, it is possible to designate emoticons on the surface, and the Hermes leather accessory is also released as an accessory. The price is $29 for one and $99 for a pack of 4, and will be released on April 30th.

Apple TV 4K speeds up the SoC with A12 Bionic. Of course, 4K video playback is possible at a high frame rate. The Siri remote control was also improved, and a circular touch pad reminiscent of the iPod click wheel was added to increase operability. The click pad itself is in 5 directions and can recognize the whole and quickly swipe. It is also possible to fast forward by turning the outside of the ring. It is also possible to control the power of the TV by using the remote control.

This product also has a function that automatically adjusts TV quality and corrects color by acquiring data using an iPhone camera and proximity sensor. It makes it easy to set up without having to touch the inside of the TV settings.

Apple also announced a podcast subscription service. Users can listen to subscriber-only programs while also supporting podcast makers. It will be introduced after iOS 14.5, iPadOS 14.5, and macOS 11.3, and CEO Tim Cook emphasized that it is possible to receive various benefits such as viewing and early access without advertisements, as well as viewing limited programs of new content. At the same time, he added that he can support his favorite podcasters to show their creativity. The podcast is scheduled to launch in 170 countries in May and is priced at $19.99 per year in the US.

In addition, Apple Card adds a feature called Apple Card family. Being a family card. This allows them to have an Apple Card from the age of 13.