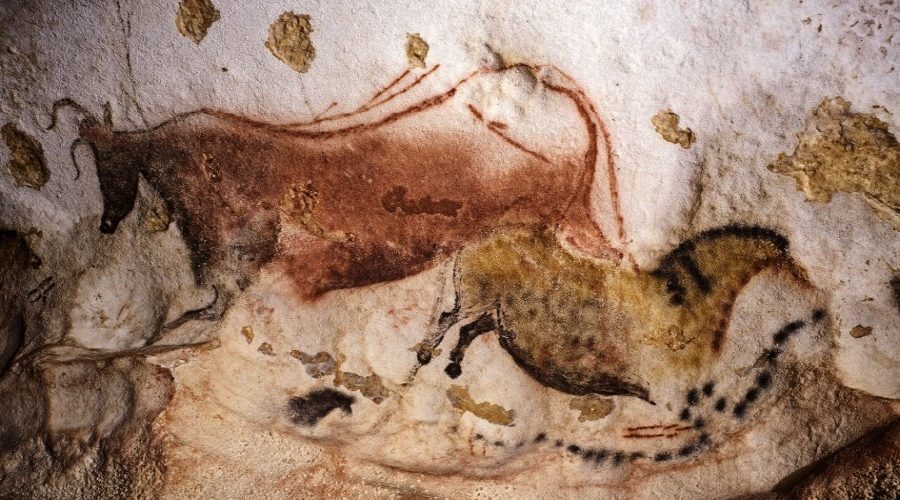 Mankind has loved painting since ancient times. The evidence remains to this day as a mural. The Grotte de Lascaux, where the Anthropocene left a number of murals 17,000 years ago, tells this. Science YouTube channel Kurzgesagt explains this and draws attention.

One day in September 1940, Marcel Rabida, an 18-year-old mechanic walking through a forest in southwestern France, suffers a case where a pet dog falls into a big hole. The dog is rescued, but the next day he decides to take three friends and investigate the hole in the dog. What those who actually entered the hole were a mural painted on one wall of the cave.

There were nearly 900 murals of animals such as horses, deer, and bison in the cave. Among these were extinct species, such as the furry rhinoceros. The mural was painted by spraying red, yellow, and black mineral pigments through a thin tube, depicted in vivid tones and was precise. Research has found that these murals were painted at least 17,000 years ago. This cave is called Lasko Cave. The two of Marcel’s party were deeply moved by the art they saw in the cave, and they continued camping near the entrance for more than a year to protect the cave.

After World War II, the French government took charge of the repair of the cave and opened it to the public in 1948. Picasso, who visited the cave the same year, said that we hadn’t invented anything new.

There are numerous mysteries in the murals of the Lasco Cave. One of them is that there is no picture of a reindeer that would have been important food for mankind in the Paleolithic period. In addition, although there are enough spaces to paint the murals, it is not known why the murals were painted in the same location where they could not be reached without building a foothold. In addition, questions remain about whether animal murals were painted in a religious sense or based on a practical intention that these animals are dangerous.

In addition to animals, there are over 1,000 murals of inexplicable shapes on the Lasco Animal. However, there are also many murals in shapes that can be understood by modern people. The bill is a representative mural of a shape that knows the meaning. This bill was drawn by pressing it on the wall of the cave and spraying the pigment on the hand.

The bill mural tells of a life in the distant past. Since there are many three-finger and four-finger bills, it can be assumed that humans who lived in the Lasco Cave lost their fingers due to frostbite.

It is estimated that a quarter of women die during childbirth and over 50% of children die under the age of five in the era of Lasco animal murals. However, if you look at the murals left, you can see that the remaining bills are almost the same as our hands, and humans in the past are similar to us. Also, although it seemed that they could not afford food and water at the time, they devoted their time to painting murals. Most of the bills left by Lasko animals are open between their fingers. It’s a strange coincidence that even now, most people tend to open between their fingers and do calculations.

However, there are opinions that the modern and the past had different motives for taking the bill. Some archaeologists have argued that the ancients had bills as part of their hunting rituals. The murals in Lasko Cave are important for archeology. However, after the incident in which mold and moss were large and the murals were rapidly deteriorated by carbon dioxide contained in human breath, the Lasco Cave is not disclosed. Since 1983, Lasoq 2, a replica cave that closely reproduces the murals of the Lasco Cave, has been open to tourists.

Considering that two out of the four people who discovered the Lasko Cave have completed their body for a year to protect the cave, the decision to close the real Lasko Cave so as not to be damaged can be said to be inevitable. The Lasko Cave still exists, but it is impossible for ordinary people to enter it.