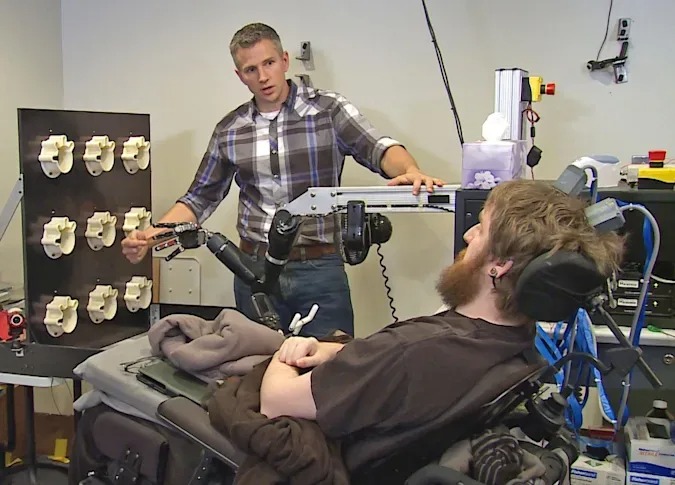 I added a sense of touch to a robotic arm that moves with a brain implant.

According to a paper from the bioengineering team at the University of Pittsburgh Institute of Rehabilitation and Neuroscience, published in the journal Science, it has been reported that it has succeeded in making it easier to control the robotic arm that gives tactile stimulation to the brain. In the experiment, the artificial tactile sense was supplemented with the motion of grasping something that was dependent on the time of day, and it is said that the amount of time it takes to grasp an object or an edge was halved from 20.9 seconds to 10.2 seconds.

Participants who participated in the BCI clinical trial because their arm was disabled in a traffic accident were implanted with four microelectrode arrays developed by Black Look Microsystems. Through this, they were implanted in the brain area that processes human sensory information called somatosensory cortex as well as brain sensory cortex. He became the first person to fill the implant. With this implant, not only the robot arm can be manipulated, but the spine, which can feel the sense of touch, can behave like a neural circuit if it is normal. For example, when using a robotic arm to hold an object such as a ball, the robotic finger torque sensor transmits an electrical signal to the brain implant and stimulates the brain with electrodes connected to each finger.

The tactile sense that the experimenter can get is not a natural feeling, but a feeling of pressure or pain, but he said that he had no trouble trying to get used to it because he had already handled robotic prosthetics. For example, in a test that performs the task of picking up various objects on a table and moving them on a slightly higher pedestal, it is said that the one with tactile feedback by electrical stimulation was able to finish the task at twice the speed of the test without stimulation.

The research team revealed that they did not want to limit the problem by removing the visual elements, and that the efficiency improved considerably even with a limited sense. However, there is still a long way to go to practical use, such as allowing a sense of touch to be obtained, but it is said that better results can be obtained if a normal approach is possible rather than through inputting information into the brain. Related information can be found here.