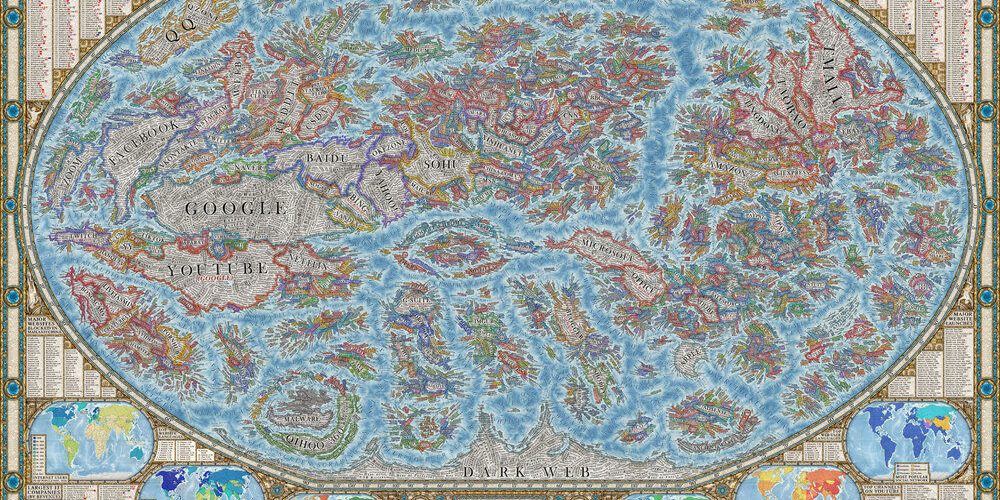 Halcyon Maps, which maps various fields such as literature and the night sky, and provides easy-to-understand information, has released the Map of the Internet, a simple and comprehensive visualization of the Internet situation from 2020 to 2021. If you look at this map, you can see at a glance what kind of power various Internet services such as Google, YouTube, and Twitter are forming.

In the 2021 version of the Internet map, continents are divided according to fields such as news, sites, search engines, and social media, and Google and YouTube are determined in size according to the number of Alexa searches from January 2021 to January 2021.

On the SNS continent, Instagram and Twitter are bigger than Reddit. Concepts that symbolize each country’s services are recorded as landmarks. Popular contents within the service are displayed as villages, etc. In the center of the continent, there are CNN, BBC, and The New York Times in the state of the news continent. There are also IT news sites such as Verge and Vice, and game news such as IGN and GameSpot. There is also a weather news island and a sports island here.

Browsers such as Chrome, Edge, and Opera are arranged in a circle along the equator, and telecommunication companies such as AT&TW and Cloudfront are arranged in the center. University-related islands such as Harvard and MIT and Wikipedia islands are floating on the Arctic side.

Halcion Maps explains that as the site’s popularity changes over the years, old sites can be shut down and replaced by new ones. Related information can be found here.