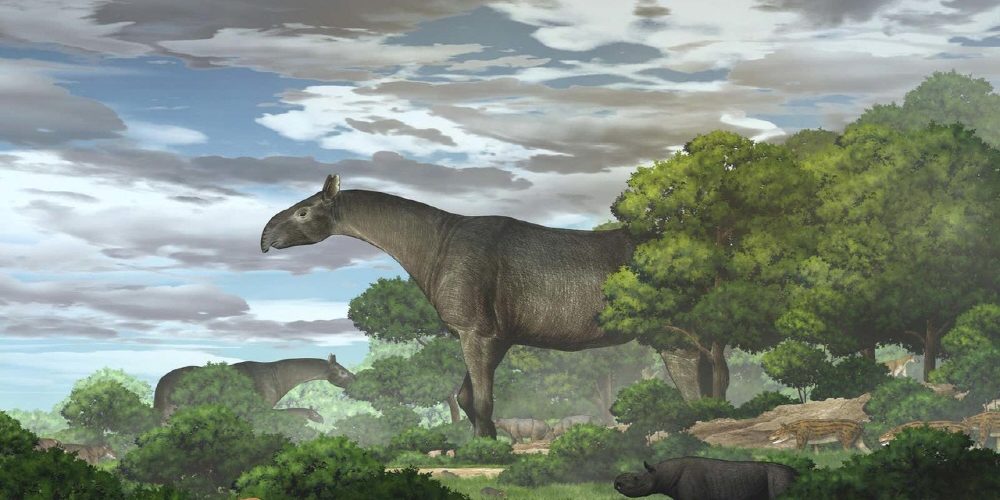 Dinosaurs come to mind when we think of ancient mega-animals, but in evolutionary history, mammals have also created quite large animals. The largest animal ever recorded is not a dinosaur, but one of the mammals, the whale, but the mammoth was also quite large in land mammals, but Paraceratherium. Although now extinct, fossils have been found in China, Mongolia, Kazakhstan, and Pakistan. The process of evolution to a gigantic size is somewhat ambiguous, and the exact physique is not known because many fossils are not in perfect form. Anyway, it’s pretty obvious it’s huge

A new species fossil has been added to this gigantic genus, according to a paper published in the journal Communications Biology by a research team from the Anthropology Research Institute of the Chinese Academy of Sciences. Paraceratherium linxiaense, said to have lived in northwestern China 25 million years ago, is the main character.

The Paraceraterium Linxiaense fossil was found in the Gansu Basin in northwestern China. Two fossils were unearthed, from one skull and the first cervical vertebra of the mandible, and the second cervical and two thoracic vertebrae from the other. The site of discovery is in a stratum estimated to be 26.5 million years ago.

One of the fossils unearthed this time reveals that the skull is in excellent condition with jaws and neck vertebrae attached to it, indicating that it was buried quickly because it is fairly well preserved. This fossil was analyzed from December 2016 to February 2017. The research team created a digital 3D model by laser scanning a fossil sample, and compared it with other giant sizes by identifying the characteristics of Paraceraterium linchaensee.

The fossils found as a result of the analysis are said to be new species completely different from those originally known. Compared to other Paracerateriums, the Paraceraterium Linchaense fossil has a thinner skull, a shorter nose, a longer neck, and deeper nasal passages. The first fangs were smaller, the nose was longer, and the body length was estimated at 1.14 m from the skull, which is different from other species of Paraceraterium.

These partial fossils estimate the weight of Paraceraterium linchaense to be 24 tonnes, which is equivalent to four large modern African elephants. It is said to be 5 m high and 8 m long. It is said that the Paraceraterium Linchaense bridge is suitable for running for a surprisingly long time, and because its head reached a height of 7 meters, it was said that it was able to pluck the young leaves at the top of a tree. The nose, which can grab objects like an elephant, was thought to be useful for winding branches and cutting leaves with incisors.

Interestingly, Paraceraterium linshaense is similar in size to the massive size it once inhabited in what is now Pakistan. A new study suggests that giant rhinos migrated from northwestern China across Tibet and into the continents of India and Pakistan. This is also meaningful in an evolutionary or geological sense. A lineage of giant rhinos may have spread along the ancient East Coast of the Sea of Thetis, perhaps through the lowlands of the region. Related information can be found here.