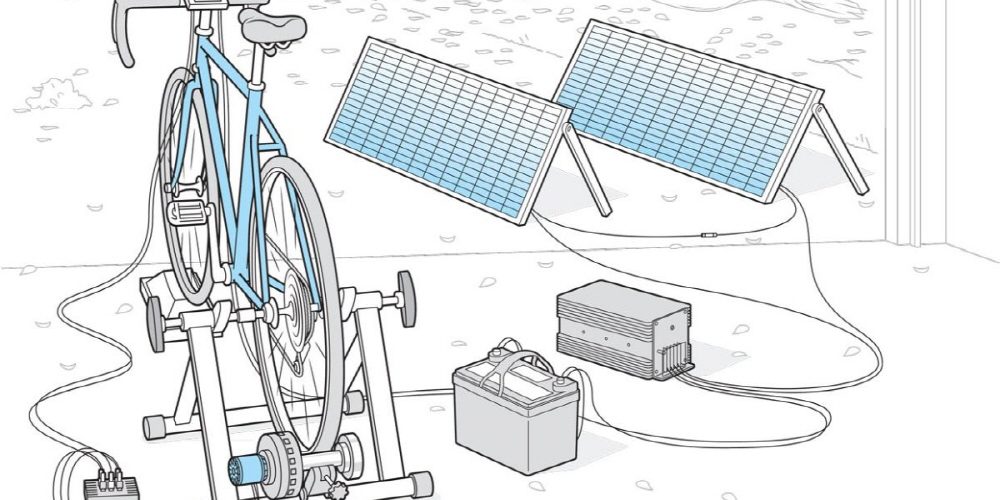 In order to supply power when a power outage occurs, there is a way to introduce a generator, but to use a gasoline generator, gasoline must be prepared, and it is difficult to supply electricity in a situation where it is difficult to obtain gasoline. David Schneider, editor of the IEEE journal of the American Society of Electrical and Electronics Engineers, has built a system that can supply power at any time by combining bicycle power generation and solar power generation.

Although he lives on the east coast of the United States, where typhoon damage is relatively low, power outages can still occur due to storms and harsh blizzards in winter. As the need for Internet access, which is essential for electricity, has increased due to COVID-19, and the number of electrical construction workers is decreasing and power outages are likely to continue, he decides to build a self-generation system.

During the hurricane that hit New Jersey in 2012, many data centers were shut down because gasoline was not available. The reason for adopting solar power in the self-generation system is that a generator that does not rely on gasoline was required to supply electricity without oil.

He purchased two 100W solar panels from Amazon.com and 12V 35Ah batteries capable of accumulating 420Wh and already had a 35A DC-DC converter to get the 300Wh power needed to run four laptops, a cable modem and a wireless router for four hours. A power generation system was established with In this way, electricity can be supplied even if it rains for several days, but if it rains for a long time, solar power generation will not be possible and the battery power will be insufficient. Schneider saw the need for a power source to further back up the backup power source, solar power.

Wind power could be used, but the human leg was chosen as a more reliable energy source. In other words, they chose bicycle power as a backup for solar power generation. He built his own bicycle generator by mounting a motor and coupler on a bicycle stand. In addition, by connecting a digital monitor and a bicycle generator, it is possible to monitor current, voltage, and power generation. An hour of stirring his bicycle generator generates enough 60Wh of electricity to connect a laptop to the Internet or make a phone call for several hours.

He says powering a bicycle generator will be a great experience for children, and will give them an opportunity to think about how much power they need to generate the electricity they use every time they turn on the TV and lights. In addition, to more easily secure emergency power without building such a power generation system, there is a method of using a portable power source intended for outdoor use. Related information can be found here.