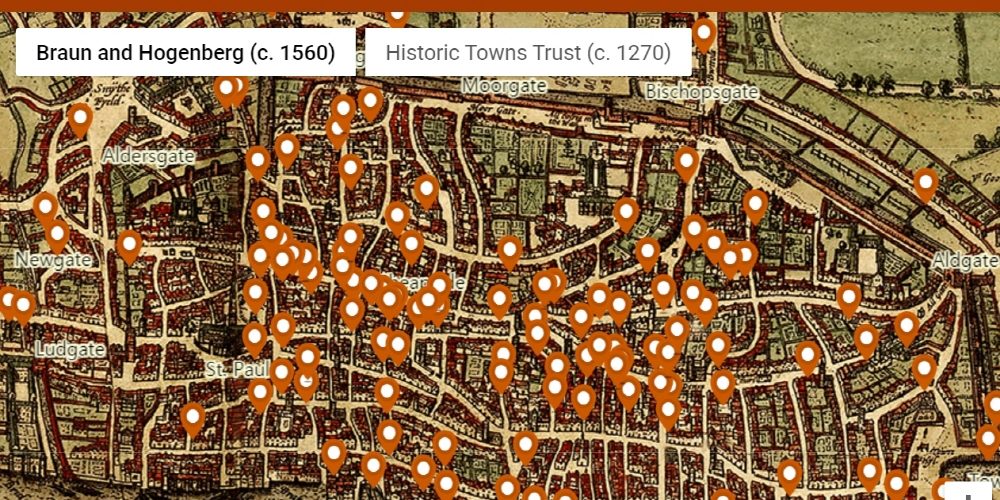 A murder case in medieval London on a map…

The London Medieval Murder Map, a map that can move, enlarge, and reduce murder data collected by a criminologist at the University of Cambridge, UK, like Google Maps, is drawing attention.

If you go to the map page, there are several red pins in the City of London area north of the London Bridge. Each one shows the place where the murder took place. Hovering the mouse cursor over the pin will display an event overview. Click to view more details about the incident.

The filter at the top of the map allows you to filter out murders under various conditions. For example, you can choose according to the victim’s gender. It is also possible to classify private land or public places in the crime scene. In addition, it is possible to select the occurrence of an event by year and the type of weapon.

It can also be converted to a circa 1270 map of London published in 1989 by the Historic Towns Trust, which collects British historical maps. This allows you to view the map at a more accurate scale.

Of the 142 murders between 1300 and 1340 shown on this map, 68 per cent took place in public places, such as main streets, and 21 per cent occurred in private homes, according to Manuel Eisna, dean of the University of Cambridge’s criminology department. In addition, there were 2 murders in the fortresses, while 6 were murders in religious facilities. In addition, daggers and swords accounted for 68% of the total, but clubs were also used in 19%. It is said that it was common for men in London at the end of the Middle Ages to be armed, and to keep the weapon within reach so that both the assailant and the victim could use it immediately in case of a conflict. Related information can be found here.