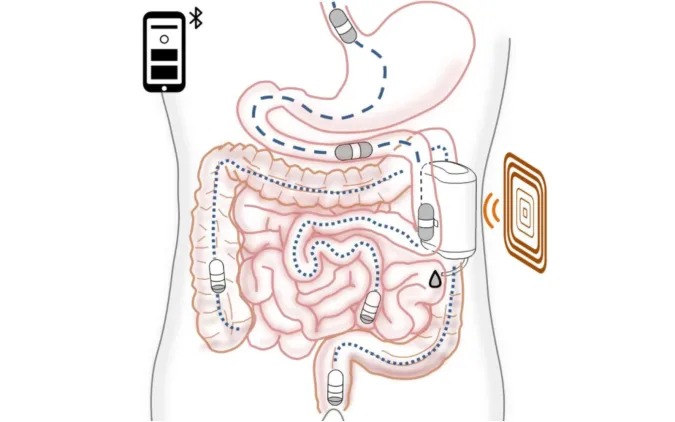 An Italian research team is developing an internal robot that can administer insulin to diabetics without having to poke a needle.

This robot delivery system uses a robot about the size of a flip-type cell phone and a capsule in which the user has accumulated insulin as a set by embedding the robot and the body along the abdominal wall connecting the small intestine.

The capsules are magnetically fixed to each other in the immediate vicinity of the robot body, which orally moves through the intestine. It’s easy to understand if you think of a magnetic sandwich window or a water tank vacuum. When the capsule is fixed well, the robot body extracts the insulin from the storage tank extending to the capsule. When insulin supply is finished, the body weakens its magnetic force and administers the capsule. The capsule is released from the docking station and flows through the digestive tract towards the exit, where it is returned out of the body.

Because the robot body is powered by a battery, it needs to be charged occasionally, but it does not require a charging cable to be plugged into the body, and it uses the contactless charging method that is generally widespread with smartphones and the like. In addition, since robot work is possible with a mobile app, insulin administration can be performed on a smartphone.

Once the system is complete, it will help patients with type 1 diabetes who need to administer insulin several times a day. There are still pump-type insulin devices instead of syringes, but this makes it convenient to administer insulin before use because, for example, a needle or tube is inserted into the body to send insulin from an external pump, or an implanted pump is pulled out of the body to replenish the tube insulin. You have to weigh your gender and your risk of bacterial infection. In this regard, the fact that there is no need for a tube to be drawn out of the body is a significant attraction.

In this paper, a research team from the Department of Biomedical Science and Robotics at the Santana Graduate School in Italy confirmed that the test-purpose motion by using a pig prototype was possible and explained that they were able to control the blood sugar of the pig for several hours. In addition, it is explained that this system can be applied not only to insulin but also to administering chemotherapy to cancer patients. Related information can be found here.