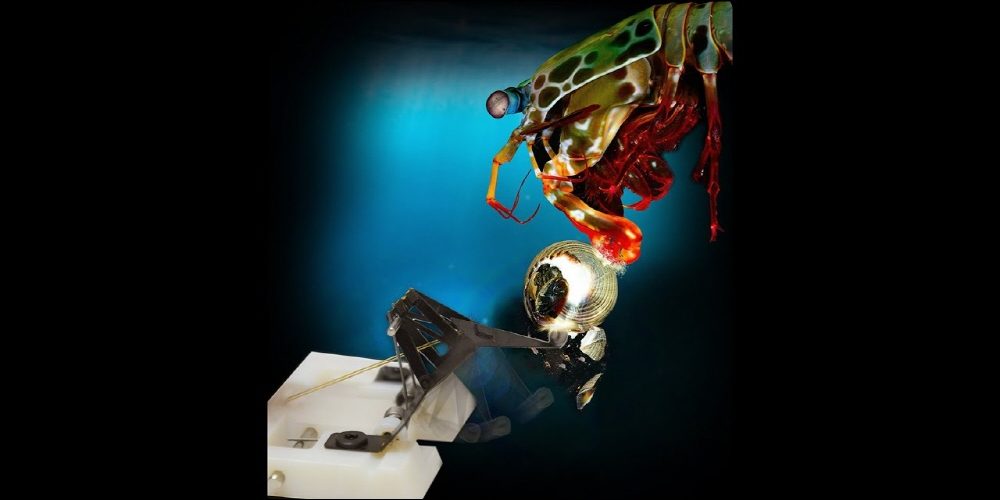 The lobster is a kind of arthropod that lives on the seabed, and it is said that a blow with its large legs is powerful enough to break the shells of crabs or seashells, and it is said that the glass of the tank can be cracked. We developed a robot that reproduces a powerful attack by modeling such a crayfish punch mechanism.

In developing the robot, the Harvard University SEAS research team said that a robot that mimics the mandrake punch, frog legs, and chameleon tongue, accumulate elastic energy and release it rapidly, providing movement that is hard to see with the naked eye. The crayfish punch comes out of a leg that specializes in punching. This exoskeleton bends like a spring and bends into the upper endoskeleton to store elastic energy. If the endoskeleton is detached from here, it thumps 2 milliseconds ago.

In other words, as if shooting a sharp arrow like a bow and arrow, the endoskeletal bracket is separated and elastic energy is blown out at once to create a huge punch. However, it is said that this mechanism is only a hypothesis and has not been proven. The research team said that the crayfish does not have special muscles compared to other crustaceans, and that not only muscle strength but also rapid movement is necessary for the mantisfish to have some kind of mechanical structure that sends out a punch with a tremendous acceleration force.

The research team built a 1.5g robot with a size close to that of a real mandrake to explain the mantissa punch mechanism. This robot reproduces the crayfish structure, and the crayfish uses its skeletal structure rather than muscle strength to deliver punches.

The research team actually conducted an experiment with this robot, and as a result, the robot succeeded in producing a punch of 26 m/sec. Although this robot punch does not reach the speed of a real crayfish punch, according to the research team, it is an acceleration force equivalent to reaching 93 km/h in 4 milliseconds. In addition, the study revealed that there are four stages in the mechanism by which crayfish make punches.

The research team said that by re-understanding the structure of the crayfish punch in the process of building a physical model and developing a mathematical model, the research team was able to discover a mechanism to control the large energy that allows the organism to perform multiple high-speed movements. In addition, the research team revealed that not only the crayfish punch, but also the rapid opening movement, the movement of extending the chameleon’s long tongue, and the structure of the ant raising its jaw can be imitated and studied in a way that is reproduced by a robot. Related information can be found here.