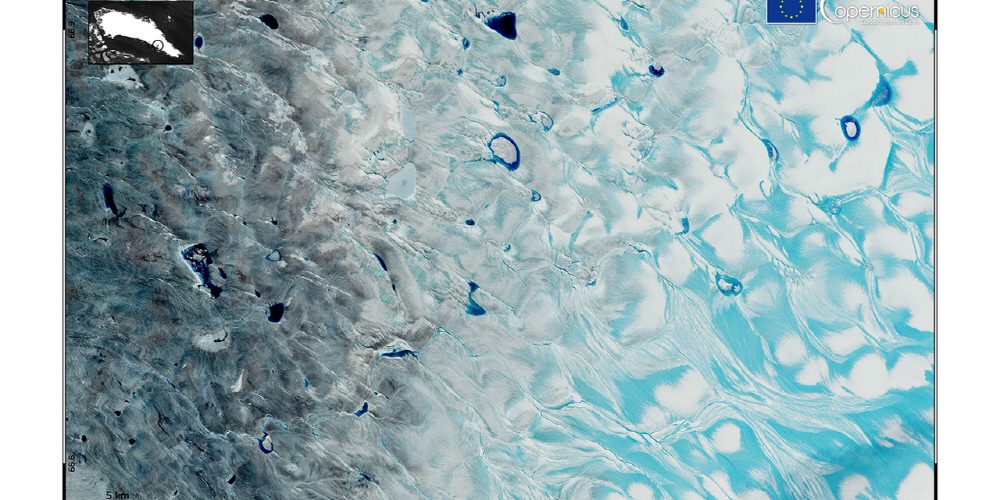 Greenland as seen from satellite images, the other side of beauty

The picture shows southwestern Greenland captured by the European Space Agency’s ESA satellite. Of course, behind this beautiful face lies the climate change crisis. The heatwave that hit the Arctic twice this summer alone is melting the ice in large quantities.

The surface of the ice covering Greenland in the photo should normally have repetitive bumps and undulations, but as the ice melts, it shows a smooth bright blue gradation. Molten water flows downward to the right. It can also be seen that there is a deep ultramarine pond with stagnant water here and there.

In Greenland, it is said that in some areas, the temperature rose by 18 degrees above the average seasonal value due to the heat wave. In addition, rainfall was confirmed for the first time in history at the National Science Foundation Observatory located at the top of the mountain 3,000m above sea level. It is said that such a mass ice melt in summer is a rare phenomenon that has not been observed before.

According to the US national snow and ice data center calculates 870,000 2,000km 2 Scope naeryeotdago ice melted. This alone is serious enough, but in July of this year, the ice melted on a larger scale. The damage area is said to be 885,95 km 2 . According to an analysis from the University of Liege in Belgium, Greenland ice melted seven times more than usual, the fastest since 1950.

In 2012, the only record of damage that exceeded this year was 2012. The heatwave that hit the Arctic Circle also caused large-scale fires and a large amount of ice melted in Greenland. In this way, the effects of global warming are becoming more and more serious. The Arctic Circle is the place where the temperature is rising more markedly than any other part of the world. It is said that a pond with melted ice absorbs more heat than ice or water. If this happens, of course, the pond temperature rises, so the surrounding ice melts and water accumulates in the pond again, repeating the vicious cycle.

Forest fire soot is also a direct cause of melting ice, and rainfall also promotes ice melting. Raindrops make holes in the ice, making the ice itself unstable. As the ice melts, sea levels rise. According to the United Nations Climate Change Report, the rate of sea level rise is now most pronounced over the past 3,000 years. Greenland and Antarctic ice are contributing to this rise. Related information can be found here.