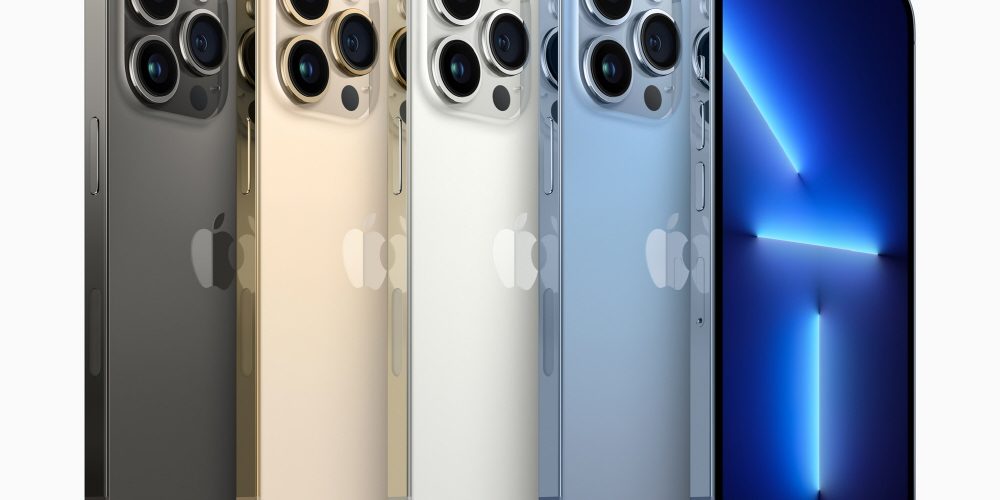 The iPhone 13 consists of a 6.1-inch regular model and a 5.4-inch iPhone 13 Mini 2. What has changed in appearance is that the notch at the top of the screen has been reduced by about 20%, making the screen space bigger.

SoC is equipped with A15 Bionic manufactured by 5nm manufacturing process and consists of 6 cores consisting of 2 high-performance cores and 4 high-efficiency cores. Apple claims that it is 50% faster than its flagship smartphone. Here, the Neural Engine has 16 cores. It is explained that the quad-core GPU is 30% faster than other companies, allowing it to easily run games or AR apps that are difficult to process.

The video feature introduces a new cinematic mode that automatically adjusts focus between multiple people while shooting. For example, if there is a framed person outside the screen, the AI will focus on that side, and if the person faces another person, the AI will switch the focus. Of course, you can also focus on a specific person.

The dustproof and waterproof function supports IP68. It is an indicator that there is no dust intrusion under any circumstances and can withstand continuous submersion, but Apple has given the proviso that it is not in a permanent state of splash, water and dust resistance, following the condition of a maximum depth of 6 m and up to 30 minutes.

As for the body color, both models added a new color, Sierra Blue, and released four silver, gold, and graphite colors. You can also choose between 128, 256, and 512GB of storage space, up to 1TB. A 1TB storage model appeared on the iPhone as well.

A number of internal improvements have also been made. When looking at the difference from the iPhone 13, the first thing to note is the AMOLED screen refresh rate. As rumored, ProMotion that supports a refresh rate of up to 120Hz has been used. The iPhone 13 is the same 60Hz as before. You can also lower the refresh rate to balance battery run time. By setting at least 10Hz according to the screen movement, unnecessary battery consumption is suppressed while maintaining responsiveness and smoothness.

The camera adopts a triple camera module unique to the pro model. The addition of a 3x telephoto lens that the iPhone 13 or mini does not have. In the iPhone 12 Pro generation, there was a difference in the telephoto focal length between the Pro and Pro Max, but this time both models are 3x telephoto. It also has a lidar scanner for distance measurement, which is only mounted on the Pro series. Pro-only macro photography is also possible with a minimum focal length of 2 cm. You can take pictures as well as videos.

Video recording has been enhanced with the ProRes codec, and resolutions up to 4K and 30 frames are supported. However, the 128GB model only supports up to 1080p resolution.

In addition, the new image adjustment mode introduced in the iPhone 13, Photograph Style, and the new shooting mode, Cinematic Mode, are of course supported.

The heart of the SoC adopts the next-generation A15 Bionic, but the Pro series model is equipped with a 5-core GPU version with excellent graphics processing speed among the A15. Since the iPhone 13 is a quad-core, the rendering speed of the Pro is higher in theory.

Apple also announced the 6th generation iPad mini on the same day. The display is enlarged to 8.3 inches, so full-screen specifications like the iPad Pro and iPad Air. The physical home button has been removed, but like the iPad Air, Touch ID is provided on the power button on the top of the body. Instead of getting rid of the Lightning port, it was replaced with USB Type-C.

It is also a big change to respond to the second-generation Apple Pencil. On the iPad mini, the volume button was on the right side of the body until now, but it’s moved to the top of the body, so you can charge the Apple Pencil on the empty right side.

The processor is A15 Bionic. Compared to the previous generation iPad mini, the CPU performance is 40% higher and the GPU performance is 80% higher. The machine learning function can also perform tasks twice as fast as before with the 16-core neural engine.

The front camera also supports 12 megapixels. The ultra-wide-angle front-facing camera can use the center stage, just like the iPad Pro. Even when making a video call, the camera automatically moves to focus on the user and detects even if someone else enters the screen. The 12-megapixel rear camera with Focus Pixels also has a True Tone flash, so you can take clear pictures even in low light.

In addition to Wi-Fi 6 support, the wireless function supports 5G in the case of Wi-Fi + Cellular model. Of course, LTE and eSIM are also supported. In addition, the battery capacity is 19.3Wh, which supports 10 hours of Wi-Fi Internet use or video playback, and 9 hours of Internet use through data communication in the cellular model.

You can choose from four colors: space gray, pink, purple, and starlight, and a Smart Folio cover to match the color is also available.

The 9th generation iPad, announced together, has powerful performance in the most affordable lineup among the iPad series. Compared to the 8th-generation iPad, the bezels around the screen are thinner and the built-in processor is replaced with an A12 Bionic, which is said to be 20% faster than before and 3 times faster than the Chromebook model.

The rear camera boosts low-light and autofocus capabilities. The front camera is an ultra-wide-angle lens with a resolution of 12 megapixels. A center frame is also supported. In addition, the display is also equipped with True Tone, a technology that automatically adapts the display color and brightness to ambient light using a sensor for the first time in an entry model.

The 9th generation iPad is preparing two options for built-in storage. The minimum capacity starts at 64GB, and you can choose between two colors, silver and space gray.

Finally, the Apple Watch Series 7. Its main body size is almost the same as that of the previous Series 6, and the display is 20% larger. Compared to the Series 3, it is said to be 50% larger.

In order to realize a large screen, the screen border has been narrowed down to 1.7mm, which is 40% less than that of the Series 6. The edges of the screen are curved along the case. The screen size is enlarged, so 50% more characters can be seen on the screen than the Series 6, and it also responds to character input using the full QWERTY keyboard. The UI has also been optimized to increase the button size. In addition, the constant display has been improved to reveal 70% more display than the Series 6 even when the wrist is lowered.

Charging is also 33% faster using a new charger that connects to a USB Type-C adapter, and it can measure sleep for 8 hours after charging for 8 minutes.

For durability, the front crystal covering the display is 50% thicker than the Series 6, and the strength is increased, and the geometric structure also increases the durability against cracks. In addition, by integrating the touch sensor into the OLED panel, the body is thinner and the bezel width is reduced. In addition, for the first time in an Apple Watch, it supports IP6X dust resistance and supports 50m water resistance.

In terms of health, all models correspond to blood oxygenation and ECG measurements. In addition to automatically starting a bicycle exercise when you start pedaling, the exercise can detect bicycle overturning by greatly enhancing the measurement of bicycle movement. In addition, more accurate calorie measurement is realized when using an electric bicycle. Prices start at $399.

Apple will also start shipping iOS 15, iPadOS 15, and watchOS 8. iOS 15 main feature is live text. It is a function that can display the names of buildings, images, plants, animals, etc. that are aimed at the camera like Google Lens, or convert the characters written on the whiteboard into text data on the iPhone.

Alarm Control adds a new concentration mode to temporarily block unnecessary notifications, so it is helpful when you want to focus on your studies or work.

FaceTime supports spatial audio. In addition, the Share Play function allows you to watch videos with friends or remotely through FaceTime. The Share Play feature will not be available at the time of iOS 15 delivery, but it will be provided through an update later. Related information can be found here.