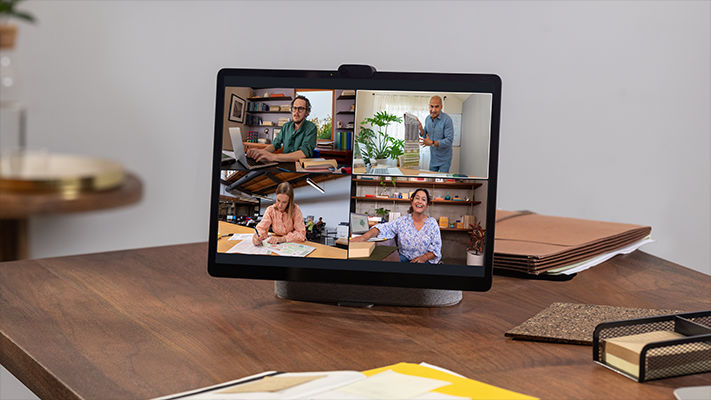 Facebook has announced Portal Go and Portal +, the latest models of Portal, a video call device.

Portal Go is a video call device equipped with a 10-inch display that supports 1280×800 resolution. Since it has a built-in battery and can be charged wirelessly just by placing it on a charging stand, it can be used while carrying it rather than being fixed in one place. For this purpose, there is a carrying handle on the back.

On the surface, an ultra-wide 12-megapixel camera for video calls is mounted, and there is a volume control button and a power button. In addition, you can enjoy music at a loud volume throughout the room through the integrated speaker in the main body. Facebook CEO Mark Zuckerberg said that Portal Go was one of the features we had been looking forward to from the very beginning of the portal idea to make it more portable. said that Portal Go will solve the problem.

Portal Plus is a high-end model with a 14-inch screen and a resolution of 2160×1440. An ultra-wide 12-megapixel camera is mounted on the top of the display, and it can be turned on and off easily by sliding the camera cover.

The display can be tilted up and down, stereo speakers are mounted, and Hi-Fi playback is possible. By adopting a 14-inch large display, a zoom video call can display up to 25 people at the same time.

With the rise of remote work, Facebook said that Portal Plus helps to secure PC computing power as a terminal for temporary calls, making multitasking easier by taking notes or reporting presentations.

Portals are often placed in home kitchens and living rooms, so Facebook is announcing the introduction of a Household Mode for the whole family to use the portal. In household mode, you can specify shared apps and contacts on the portal, and you can have fine-grained control over how you and other members of your family interact with the portal.

In addition, the Watch Together function has been upgraded so that multiple people can enjoy the same video content while making a video call. The Watch Together feature will be available first in the United States and will be supported worldwide in late 2021. Additionally, WhatsApp multi-device support will be available on the portal in the coming months. In addition to being able to use WhatsApp on the portal even if the smartphone battery runs out, you can use WhatsApp on up to four devices at the same time. Facebook also notes that WhatsApp multi-device support was one of the features in high demand.

The portal is not a dedicated device for video calls, but music streams such as Spotify and Pandora can play music as a service, or display favorite photos stored on Facebook and Instagram. All portals are equipped with Facebook Assistant for hands-free video calls and can also play music and podcasts using voice recognition. Of course, it is also equipped with Amazon’s voice recognition system, Alexa, so you can control hands-free devices through it. In addition, in December 2021, Microsoft Teams, a video conferencing tool, will be available on the portal.

Facebook did not disclose portal sales, but according to IDC, a research firm, Facebook shipped more than 600,000 portals in 2020, a 28% increase from the previous year. In addition, more than 400,000 portals are being shipped in the first half of 2021, and the number of portals shipped in 2021 is expected to increase more than in 2020.

Although this number is not comparable to the Amazon Echo series, it is not clear how much difference in sales actually is because Amazon does not disclose the sales of Echo Show, a monitor attachment device that directly competes. An IDC analyst said that although the growth of portals was suppressed through the negative impression of Facebook, the portal succeeded in increasing sales during the period by conducting active marketing in the early stages of the COVID-19 pandemic. Related information can be found here.