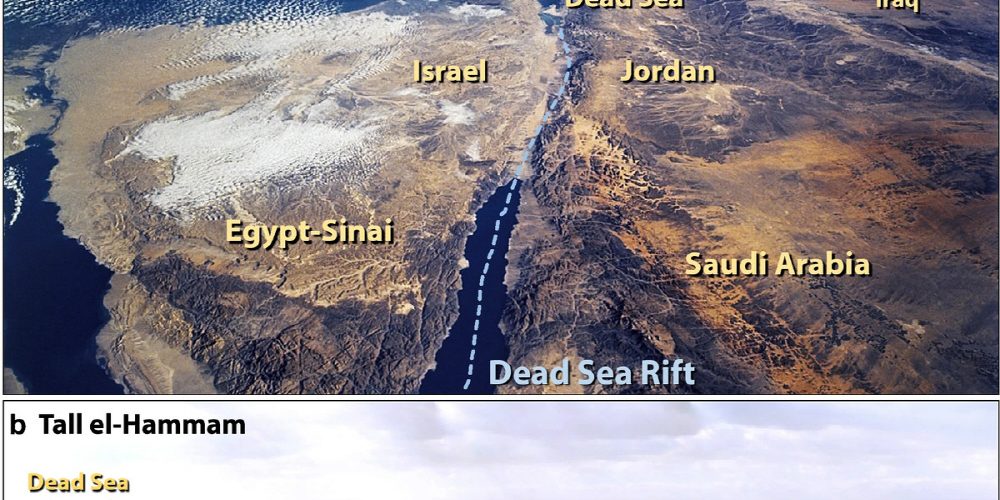 Excavation of Jordan Valley ruins revealed that the city that prospered around 1650 BC, which corresponds to the middle of the Bronze Age, was destroyed by an explosion of 12 mexaton equivalent to TNT. The explosion was about 1,000 times the size of the atomic bomb dropped on Hiroshima in 1945 and far surpassed the Tunguska explosion, which was the largest explosion in history.

Tell El Hammam is said to have existed from around 4700 BC, and is said to have flourished for 3,000 years until its destruction in 1650 BC. It is also ten times as large as Jerusalem and five times as large as Jericho, and was the largest city in the southern part of the Levant before 3,600 years ago. However, the present location of Tell el-Hammam is a relatively flat, disc-shaped wilderness.

The palace, believed to have been in Tell el-Hammam before its destruction, has an area of 52×27 m and appears to have at least four floors, but few of these remain today. The palace was built at a height of 33m or more from the lower city because it was surrounded by 7~8m thick walls and 4m thick defensive walls, but in excavation, all of the steps were lost, and pieces of bricks were blown northeast of the palace.

After the destruction of Tell El Hammam, the parts that were deposited by the wind over 3600 years or the part where the fourth-story palace was destroyed and the first floor was shattered and covered are gaps and carbon layers created by burning rugs and tapestry used in the palace at the time. It is said that there is In sculptural patterns destroyed by war or earthquakes, fragments of partially melted foamed bricks or molten building plaster at high temperatures are found. In addition, an examination of the surrounding strata of 1.5 m revealed a random mixture of thousands of different ceramic fragments, mud brick fragments, charred wood, burnt grains, bones, limestone, and gravel. Among them, it is said that the bones showed extremely fragmented human joints and skeletons.

In fact, if you look at the drawings that were excavated, it is said that the other side was melted and had a hole in it. In addition, when the carbon in the ground was analyzed, carbon crystal molecules called shocked quart and diamondoid were found. This quartz means that the diamonoids that appear in the fall of the meteorite have been exposed to high temperatures that Tell El Hammam would not normally be able to achieve.

In addition to molten gypsum, platinum, gold and silver, iridium, nickel, and zircon were also found, and the research team believes that the explosion caused by the meteorite’s fall destroyed Tell El Hammam. Also, it seems that part of the nearby fortified city of Jericho was blown away by an explosion.

It is said that the explosive energy that blew up Tell El Hammam is equivalent to 1,000 times the atomic bomb dropped on Hiroshima in 1945, and the diameter of the meteorite that fell is estimated to be 50m. It is claimed to be on a larger scale than the 1908 Tunguska explosion that struck Siberian forests.

The research team also announced that abnormally high salt concentrations were detected in the strata when Tell El Hammam was destroyed. It is said that there were 15 cities and more than 100 small towns around the area where Tell El Hammam was until the meteorite fell. Fundamentally, although there is a lot of fertile farmland between Jordan and Israel, the reason why the Jordan Valley has been abandoned for centuries is believed to be because crops did not grow at all and agriculture was impossible due to high salinity.

As for the reason why the salinity concentration has risen sharply over a large area, the research team speculates that it may be due to high salinity surface sediments or the saline Dead Sea Lake, which was scattered around by a meteorite fall explosion. In addition, the research team concluded that the largest metropolis at that time was destroyed by a meteorite fall and the local soil salinity increased rapidly, suggesting the possibility of Sodom and Gomorrah models used in the Old Testament. Two cities are mentioned in the Bible: Sodom and Gomorrah. The inhabitants of Sodom and Gomorrah became promiscuous, and God called brimstone and fire from heaven to destroy these cities. Also, it is said that only the Lot family, who believed and kept God living in Sodom, escaped from Sodom, but Lot’s wife, who ignored God’s instruction not to look back, turned into a pillar of salt.

The theory that Tell El Hammam is Sodom has been raised before, and one of the research team members supported it. The results of this excavation are a form of reinforcing the theory that Tell el Hammam is Sodom. Also, in Jericho, where some of them flew along with Tell El-Hammam, the explanation that the city walls collapsed and fell when the people shouted and blew the trumpets to Joshua in the Old Testament may be related to this explosion. Although there is no scientific evidence that it was a model, it is said that it is possible that the verbal communication of the explosion revealed this time entered the Old Testament. Related information can be found here.