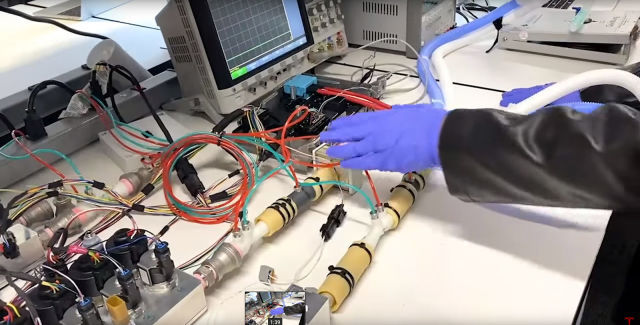 The Tesla plant has now stopped producing automobiles to spread the corona19 infection. Instead, like other automakers, parts of the plant were renovated to develop and produce ventilators, which are currently in demand worldwide.

On April 5 (local time), Tesla unveiled on YouTube how to assemble a ventilator using parts that go into production, such as Tesla Model S and Model 3. In the video, the ventilator is described, where electric vehicle parts are used in orange, medical parts are marked in blue, and others are marked in gray.

The ventilator mixes oxygen and compressed air into a mixing chamber used in Tesla car air conditioners, and injects it into the patient’s lungs from a pump through a manifold while controlling pressure and flow rate. This operation is controlled by the Tesla vehicle computer and infotainment system, and various information can be viewed on the Model 3 touch screen. There is also a battery-powered backup system in case the patient needs to be moved while the system is running.

Tesla has already prepared large quantities of Model 3 parts, and is trying to build a respirator by combining reliable parts. Therefore, in theory, it can speed up the equipment development and manufacturing process. However, the newly developed ventilator must go through the FDA approval process, so it may take time to actually use it in the medical field.

Tesla CEO Elon Musk is also planning to produce or purchase an FDA-approved ventilator from Medtronic and send it to hospitals, as well as a ventilator with auto parts assembly. The purchased ventilator had already begun shipping, and NYC Health and Hospitals tweeted to express appreciation for the supply. Related information can be found here .