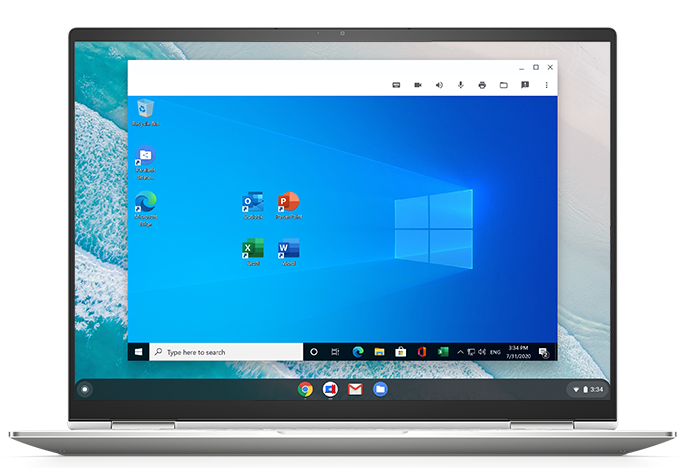 Parallels has been developing and selling Parallels Desktop for Mac, a virtualization software that can emulate Windows on a Mac for several years. Through this know-how, it has partnered with Google to implement similar functions in Chromebooks.

This service is to deploy a virtual Windows 10 computer on a Chromebook. The Windows 10 disk image or Windows license needs to be prepared separately by the user. The initial version guarantees the use of Office such as Word, Excel, and PowerPoint, but the operation of other applications is still unknown.

Reportedly, the virtual machine is running in a sandbox. However, interaction with the outside is not completely blocked, and because the clipboard is shared between Chrome OS and Windows, content movement is easy, and printer printing supported by Windows is possible. You can also access the Windows desktop, documents, downloads, and user folders from ChromeOS files.

In addition, it supports full-touch function, and the window size and resolution can be changed dynamically. The operability that was well received in the existing virtual machine has been transferred as it is, such as switching to one-touch without restarting Chrome OS and Windows, stopping Windows and immediately restarting.

However, as can be seen from the product name with Enterprise, it cannot be used by individual users because it is limited to corporate Chromebooks such as companies and schools. Also, to run a full-featured Windows, the system requirements are higher than that of a Chromebook, with an Intel Core i5 or i7 processor, 16GB of memory and 128GB of storage. In other words, Windows doesn’t run on cheap Chromebooks.

Rather, it focuses on the benefits of simplifying the burden of IT administrators for enterprises of a certain size or larger, as can be seen from the emphasis on fast and large-scale deployment using the Google Management Console. Of course, as the version of the Mac version was changed, the operation became lighter, so this product may also be gradually available in Chromebooks rather than high-end in the future. Related information can be found here .