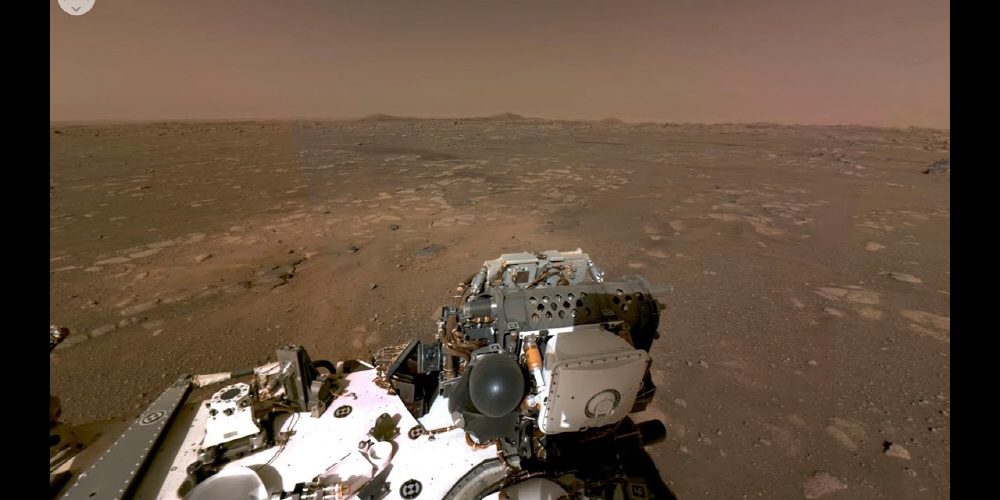 A 360-degree video taken by the Mars rover, Perservance.

NASA’s NASA Mars probe, Perseverance, landed on Mars on February 19th. In 203 days, NASA reveals the 360-degree view from the perspective that arrived on a planet 472 million kilometers from Earth, drawing attention.

The Perseverance, launched on July 30, 2020, successfully landed on Mars on February 19. For the purpose of investigating the traces of Martian life, Perservance collects surface samples such as Mars rocks and soil, and investigates Mars geology and climate.

If you look at the 360-degree video taken by such a personality, you can see sand and mountains in the distance in your field of view. The released 360-degree video can be viewed by moving the viewpoint up, down, left and right using a mouse drag and drop-in or a controller button. If the camera is tilted forward, the appearance of the personality is also visible on the camera.

Although it can’t be seen in the video, an illustration of a previous Mars rover, such as Pathfinder, is drawn on the arm that supports the camera. In addition, red and white patterns are drawn on the parachute used by Perseverance to fall on Mars. If this pattern is converted to ASCII code by substituting red 1 and white for 0, dividing it into decimal numbers and adding 64, a message (34° 11’58, N118° 10’31, Dare Mighty Things) comes to mind.

This is the coordinates of the NASA Jet Propulsion Institute that launched the Perseverance, and the text behind it comes from the remarks of President Theodore Roosevelt, who is known to have a statue on Mount Rushmore, and writes the motto of the development team to take a difficult challenge.

Meanwhile, NASA also released footage of Perservance’s historic landing on Mars with multiple cameras. On a planet 78.3 billion kilometers from Earth, the appearance of the facilitation that works well is impressive.

It is said that the development team paid close attention to the camera installation so as not to interfere with the rover body and the descent device called the Sky Crane while grasping the historical moments. As a result, Perseverance landed on Mars, allowing 23,000 copies and 30GB of data to be stored.

The Sky Crane has three cameras installed, one of which unfortunately broke down at the time the parachute was opened. However, there were two more cameras in the facility, and it was possible to capture the descending sky crane. It was equipped with a microphone, but it was said that it didn’t work properly at the time of the descent. However, after landing, the recording was definitely successful. If you listen, you can hear the sound of the wind blowing on the Earth of Mars, albeit faintly.

The video begins with the distribution of a supersonic parachute. Perseverance, which entered Mars’ atmosphere at a speed of 2100 km/h, unfolds a huge parachute with a diameter of 21.5 m and decelerates at once to about 1,600 km/h. It took 0.7 seconds to unfold the parachute, and there was no entanglement problem at all.

Also, if you look at the video, the heat-resistant shield that protects the perviousness is separated when entering the atmosphere. At this time, the shield was pushed away from the rover body as far as possible, and one of the springs came off, but it was said that there was no significant impact on the trend.

After descending, the Perservance, hanging from a parachute, swings back and forth, and activates a Sky Crane to slow it down further when it reaches a height of about 20m above the surface of Mars. The Sky Crane is a structure that slows down the speed of the rocket by reversing the rocket, but smoke does not rise from the rocket. This is because Sky Crane uses hydrazine as a propellant, so it is invisible to emit transparent nitrogen and hydrogen gas.

At the final stage, the perviousness hung on three extension cables from the Sky Crane slowly descends to the ground, pushing away the dust. The Sky Crane, whose cable was cut off at the place where it landed safely, crashed a little further away and finished its mission silently.

The status of the preference can be said to be quite healthy, and so far, the number of commands sent to the preference has reached 5,000. As the antenna system is expanded, it is said that a system that can send more commands in the future has been established. Currently, Perseverance is said to be in good communication with Ingenuity, a small exploration helicopter stored under the body. According to NASA, both the helicopter body and the base station that tracks movement are operating normally, and the battery charging proceeded without any problems. The Ingenuity Mission is expected to proceed after 30 to 60 days.

Related information can be found here.