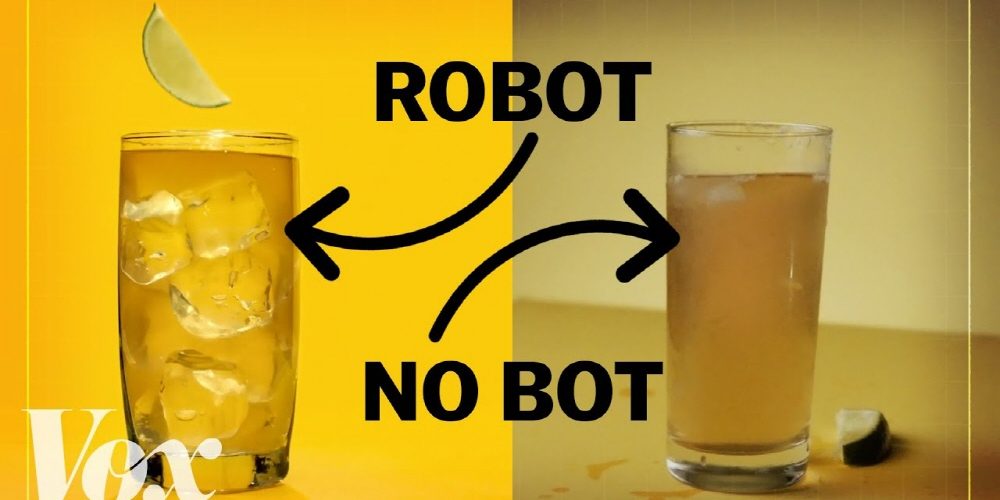 Ads promoting food should make the food look as tasty and attractive as possible in a short period of time. Therefore, they not only prepare and decorate food that arouses appetite, but also use robots to help film and effect. How will such a robot show its power?

The video shows a bottle of whiskey against a yellow background for an advertisement for Jack Daniel’s, an American whiskey brandy maker. A lime is dropped into a glass full of ice and a splash rises. It is an advertisement that makes you feel a fresh and cold image. All you need for this shoot is a turntable that rotates the glass on a yellow background. Glass and lime.

In fact, like in an advertisement, how do you make lime clean and splash into the water? What should be the structure to prevent drinks and ice from splashing while rotating and shooting? The identity is a robot for shooting. It is not the table on which the glasses are rotated, but the camera and the background plate are taken while rotating around the table with the glass at high speed.

In the advertisement, four things were applied: rotating and shooting, using super slow motion, making the drink look clean, and dropping lime into the glass. It is possible to rotate and shoot if it is solid food, but if you put alcohol in a glass and rotate it, it will scatter. Therefore, the table with the glass does not move, and a robot that rotates the camera and the background is installed around it.

The intermediate table is fixed to the stumbling block as the foundation, and the camera is bolted to the robot arm raised from the foundation. This arm rotates using a 4 horsepower motor. There were three challenges to overcome. How the monitor arm holding the camera will power the camera during high-speed rotation, how to get the camera image, and how to power the lighting. To solve this problem, a large battery was installed in the position of the rotating base to secure the rotational speed.

The next super-slow-motion shooting used the Phantom VEO4K, which can shoot 1,000 frames per second at 4K resolution equivalent to $100,000 for slow-motion shooting while rotating the camera at high speed. It is said that this camera records about 6 seconds from the timing of pressing the shooting switch, so it is possible to illuminate the moment you want to use it in an advertisement.

The yellow plate used as a background for the product to be photographed cleanly was placed by processing the same plate as the one used on the top. Of course, the food stylist adjusts the shape of the drink itself to make it look good. The last thing is to drop the lime into the glass. To do this, I had to drop the rhyme with the remote button. When the button is pressed, the lime is put into a device such as an L-shaped lever and the camera starts to rotate. When the speed is fast enough, the lever goes down and the lime falls into the glass. In this way, I filmed a video of a fresh splash.