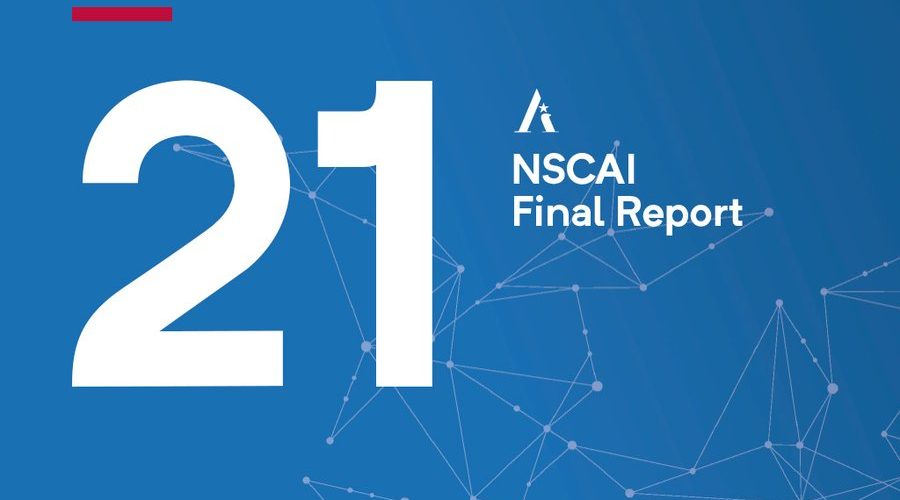 NSCAI, the National Security Council on Artificial Intelligence, chaired by former Google CEO Eric Schmidt, has released a comprehensive final report recommending a roadmap for gaining a US edge in the field of AI. In this report, the NSCAI points out that the US AI development and government-organized AI response are slowing.

NSCAI is an organization made up of 15 experts, including Google co-founder and former CEO Eric Schmidt and Amazon’s next CEO Andy Jesse, as well as Oracle CEO, Microsoft CSO, and Google Cloud AI CEO. With the 2019 Defense Authorization Act enacted in the United States, NSCAI has been reviewing AI, machine learning, and related technological advances for two years.

NSCAI is giving President Joe Biden more than doubling its AI research and development spending to $32 billion annually by 2026, establishing a new organization to manage broader AI policies, easing migration restrictions for talented AI experts, and training civil servants digital skills. For the purpose, it proposed the establishment of educational institutions and the active introduction of new technologies to US intelligence agencies.

The NSCAI also pointed out in its report that the U.S. technological edge could possibly disappear within the next 10 years, and should stop appealing to the world to ban autonomous weapons controlled by AI, and the possibility that China and Russia will comply even if a treaty is signed. Claimed it was low.

It is reported that more than 2,500 experts and entrepreneurs, including Tesla CEO Elon Musk, co-founder Demis Hasabis DeepMind, and Twitter CEO Jack Doss, signed a pledge that AI-applied autonomous weapons of destruction should not be developed. . Schmidt’s suggestion is to counter the trend of prohibiting the development of autonomous weapons using AI. Toby Walsh, a professor at the University of Sydney, said the crisis is closer and more serious and that autonomous weapons should be regulated.

One AI expert knows that AI weapons are cruel and crazy, but the US and Chinese government think tanks are arguing that the development of AI weapons is a progressive and necessary task. And billionaires like Eric Schmidt criticized him for not thinking of that at all.

Meanwhile, NSCAI is showing a cautious attitude toward facial recognition technology. An official from the NSCAI said that he was concerned about the Chinese government’s testing of surveillance technology, and said he thought it would be a pleasure for US companies to show prudence in the development of facial recognition software technology.

In addition, NSCAI is calling for the need to increase computer chip self-sufficiency and is warning of the danger of relying on Taiwanese semiconductor foundry TSMC. Eric Schmidt says microelectronics are needed for all AI, but the world’s most sophisticated chips are no longer manufactured in the United States, and the United States must re-evaluate the semiconductor supply chain resilience and security implications. Related information can be found here.