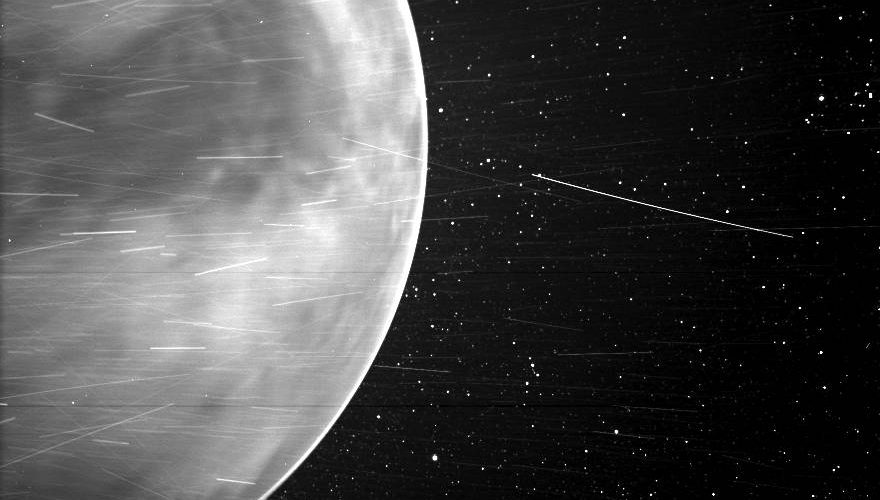 An unexpected image of Venus taken by the solar probe

NASA’s solar probe Parker Solar Probe, launched in 2018 to uncover the sun’s secrets, caught an unexpected appearance from Venus, not the Sun.

Venus on the left of the image is entirely white. This is because Venus is covered in a thick cloud of sulfuric acid, so it is obscured by the cloud and the original appearance of the ground is invisible. However, the large dark shadow in the center is the highlands of the continent of Aphrodite.

Why is the terrain visible from the invisible part? When NASA found out, it was said that the wide-field camera equipped by Parker Solar Probe could detect not only visible light but also wavelengths close to infrared. The start was the 3rd Venus Swingby conducted by Parker Solar Probe on July 11, 2020 to correct orbit. This beautiful image was captured when I photographed Venus using the Wide-field Imager for Parker Solar Probe (WISPR) from a location close to 12,380 km from the surface of Venus.

WISPR is equipped with an optical telescope for observing the solar corona at visible wavelengths. For this reason, it was thought that only the Venus cloud would be visible for observation using visible light, but the WISPR camera penetrated the cloud and detected the surface of Venus. According to the research team, it was the result of finding the heat dissipation from the surface of Venus.

By observing infrared rays, the heat radiation can be identified. In fact, Aphrodite is the largest plateau on Venus, and it is known that the surface temperature is 30 degrees Celsius lower than that of other places. Therefore, as the temperature is low, there is less heat radiation, so it seems that only the continent of Aphrodite looks dark in this shooting.

If WISPR can also be observed using near-infrared wavelengths, it is expected that it will be helpful in solar exploration, which will be challenged by the Paqua Solar Probe in the future. Specifically, in addition to the solar corona, it may be possible to observe cosmic dust surrounding the sun.

The WISPR sensitivity, which was not even predicted by the NASA team, is adjusted for practical use as it approaches the sun. For reference, what looks like a fine scratch on the surface of Venus are cosmic particles. In addition, Venus’ shining brightly is a phenomenon called atmospheric luminescence, which is the light emitted by molecules or atoms in the upper atmosphere stimulated by the ultraviolet rays of the sun. Related information can be found here.