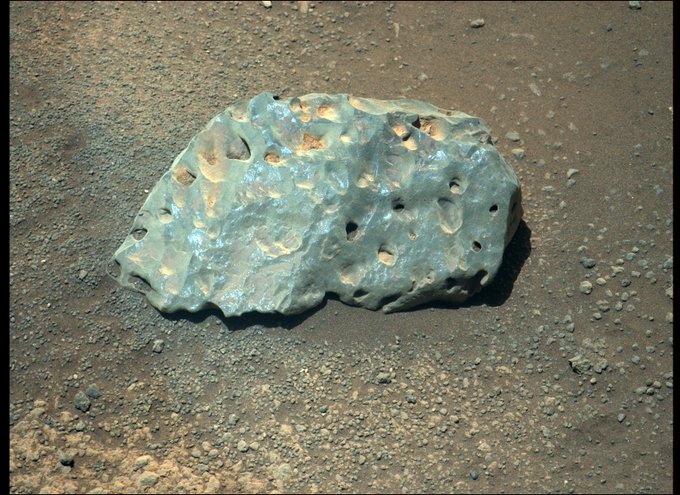 NASA is currently preparing to fly the Mars helicopter Ingenuity. In the meantime, Perserverance has discovered interesting things in the land around it. Through the official Twitter account, he said he found a blue stone rolling beneath the rover’s feet.

The 15cm-sized rock, photographed with a high-resolution camera equipped with Perseverance, is a clear turquoise color that contrasts with red soil and has several holes on the surface. If you enlarge the image, you can see that the perspective is a little to the right from the center of the photo, and the points are lined up next to each other after irradiating a laser for composition analysis.

The surface of the rock appears to be smooth and polished due to prolonged exposure to Martian red sand. Also, the bright part of the color looks like gloss.

In response, the NASA offers several hypotheses. For example, a large rock that originally popped out of it was weathered, an explosion that occurred elsewhere, something came from, or a meteorite. No conclusion has been drawn since it is a rock that has been discovered yet. The phenomena and objects that occur outside the Earth are full of things we don’t know yet, and solving them is the best part of space exploration.