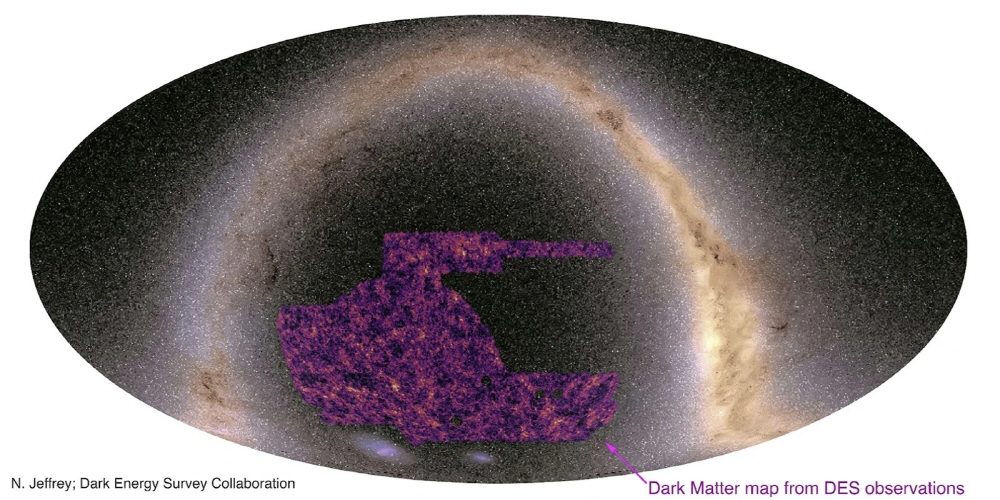 The most detailed map of cosmic dark matter released by DES

The Fermi Lab’s Dark Energy Survey (DES) team has released the largest and most detailed map of the distribution of dark matter in the universe.

Dark matter is said to make up 85% of the universe, and is a mass of matter that cannot be observed optically. Although it is only a hypothesis, it is an important substance that cannot explain some astronomical phenomena if it does not exist. Dark matter itself has an unobservable mass, so it distorts the light of distant stars. In addition, it is thought that the greater the distortion, the higher the concentration of dark matter existing therebetween.

The new space map released by DES was announced through the results of analyzing 100 million galaxies with the Victor M Blanco Telescope in Chile from 2013 to 2019. This map shows how dark matter is distributed in the universe.

The study analyzed the distribution of dark matter in a relatively close part of the universe through the weak gravitational lensing effect. The results show that the dark matter distribution is a bit smoother and more diffuse than currently predicted by the most reliable theories. It also surprises and confuses astronomers because it appears to deviate from Einstein’s general theory of relativity.

An official from the research team involved in the mapping said the result is a big problem for physics. If it does not agree with the general theory of relativity, then Einstein was wrong. This may mean that physics is damaged. But for physicists, it’s also interesting. Because it means that there is something new to discover about the true nature of the universe.

The results of DES also provide little support for the current theory that dark energy is constant. However, the inconsistency discovered this time may change the perception of researchers so far. The real universe may actually be different from what scientists have thought so far. This map of the distribution of dark matter could lead to the discovery of new models that defy assumptions so far. Related information can be found here.