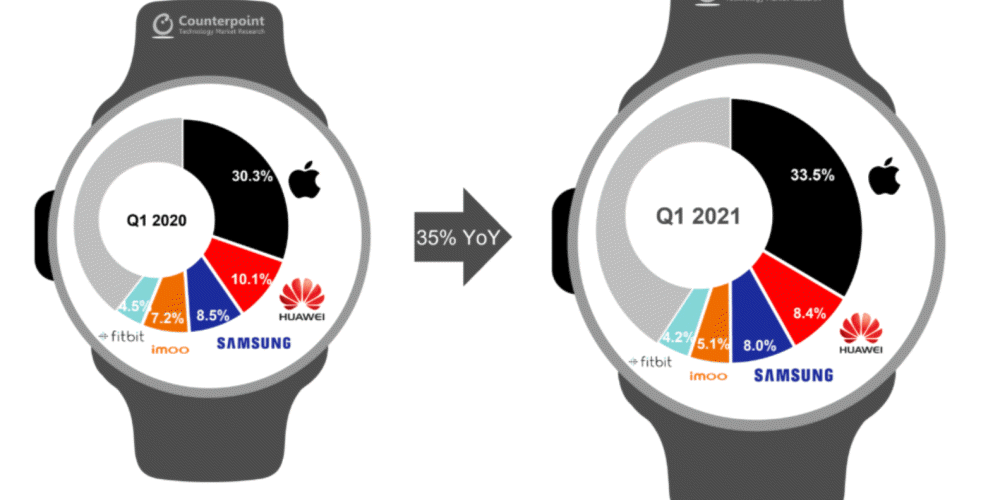 Market research firm Counterpoint Research and IDC have released smartwatch and wearable device shipments and market share data for the first quarter of 2021.

According to Central Point Research, global smartwatch shipments in the first quarter of 2021 increased by 35% compared to the same period last year. IDC also reported that smartwatch shipments worldwide in the first quarter of 2021 were 104.6 million units, an increase of 34.4% from 77.8 million units in the same period last year.

Meanwhile, Xiaomi’s smartwatch and wireless earphone sales were strong, but the number of wristband-type Mi smartband shipments decreased. Huawei, which introduced the Huawei Watch, lost its market share in the aftermath of trade restrictions, but sales of smartwatches, wristbands and wireless earphones showed a smooth increase in China.

In the case of smartwatch operating system, Counterpoint Research said that Apple watchOS has more than a third of the market share, but Google WearOS has not achieved success so far. It is explained that this is because it develops and installs its own operating system such as Garmin OS. It also analyzed that WearOS is lagging behind in battery optimization and chipset support.

However, as Google and Samsung Electronics announced that they would unify their platforms for smartwatches, Counterpoint Research sees a big change in this trend going forward. Related information can be found here ( Counterpoint , IDC ).