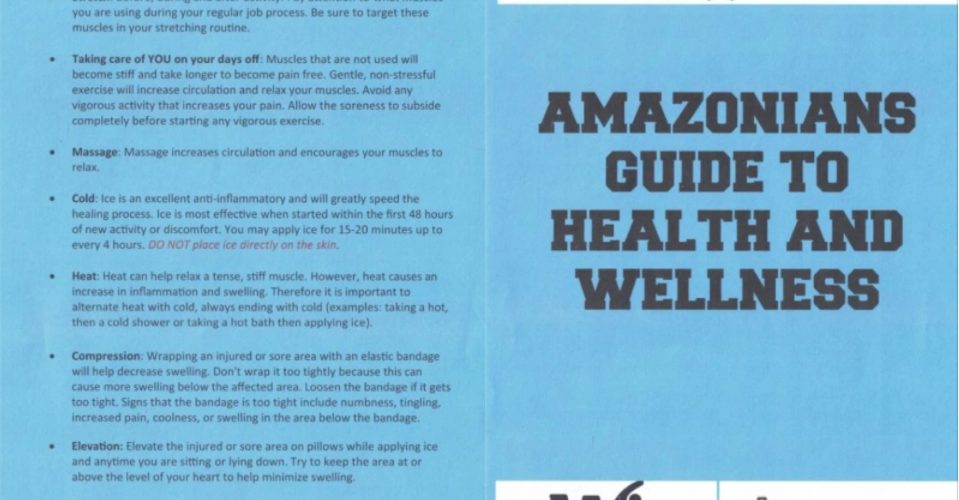 Amazon logistics centers are known as one of the most dangerous workplaces in the United States. However, this stigma may not be eradicated unless the awareness of the employment side is changed.

According to reports, Amazon’s logistics center is asking employees to think of themselves as industrial players, not gears built into giant machines, in a pamphlet distributed under the title of the Working Well Program. He told them to manage their physical condition on a regular basis so that they can walk up to 20 km in the warehouse every day, and to check the color of their urine to check their health.

In addition, the pamphlet states that some employees consume an average of 400 kcal per hour, and asks them to prepare for life as an athlete, secure diet and sleep, and pay attention to the color of urine so that they do not become dehydrated. It was written as if the way to do this was taken for granted.

He also gives advice familiar to long-distance runners and hikers who have to walk continuously for several days, stating to be careful not to cross shoes and blisters on the soles of the feet.

But players don’t usually play every day. In order to work in the best condition, education is necessary, but thorough warm-up exercises and sufficient rest are also necessary. Also, the training time is as long as half a day, not for 8 to 10 hours of practice every day alternately. Meals should also be prepared by a nutritionist or cook with well-balanced nutrition and calorie management.

On the other hand, if an Amazon warehouse worker consumes an average of 400 kcal per hour, they must consume nearly twice as many calories per day as the general public. But most Amazon employees aren’t born sportsmen, nor do they do weight training every day. He didn’t even experience high-end manual labor until he came to work. If that is the case, you may become exhausted every day and lack the concentration to run through the warehouse, and eventually, disasters may become inevitable.

The number of serious injuries in Amazon warehouses is said to have improved significantly in 2020 from 2017-2019. However, there are twice as many serious injuries as workers in warehouses elsewhere. If you use the word “athlete” and think that asking employees to voluntarily check their urine color will really lead to an improved workplace health environment, you are greatly mistaken. Employers’ job is to allocate work to employees at a physically fit pace and to provide support staff to stay healthy.

After the report, Amazon said that the pamphlet was destroyed immediately after production. However, a former employee claims that the booklet was first seen in November 2020 and then mass-copied and distributed in warehouses a few weeks later. Related information can be found here.