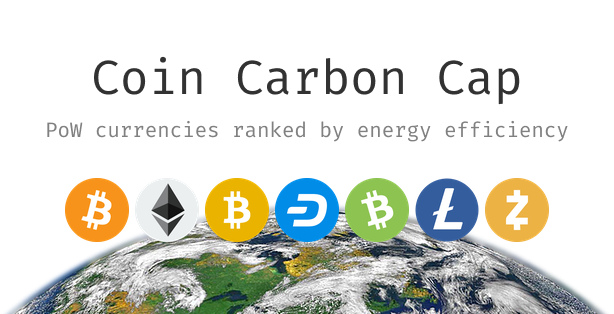 Since the crypto asset Bitcoin is created by data mining running programs on computers, it requires a lot of power to create or operate. Because of this, areas with low power are often used as Bitcoin mining sites. As the power consumption of cryptocurrencies becomes an issue from the perspective of global warming, Coin Carbon Cap, which displays power consumption and carbon dioxide emissions by cryptocurrencies, has been released.

Recently, the value of cryptocurrencies, including Bitcoin, is on the rise. However, in 2018, there are also concerns about the impact on the environment, such as a report that the temperature will rise by 1.5 degrees within 20 years due to bitcoin mining. Bill Gates also made a statement in March 2021 to the effect that Bitcoin would have an adverse effect on the planet.

On the other hand, it is also pointed out that the use of PoW (proof of work) energy, one of the Bitcoin consensus algorithms, is not proportional to the transaction volume. In fact, cryptocurrency energy use is largely driven by mining rather than transactions, and the popularity of mining depends on the price of cryptocurrency. Thus, Bitcoin’s energy use and carbon dioxide emissions are the largest, and the unpopular Bitcoin SV energy use and carbon dioxide emissions are the least. Related information can be found here.