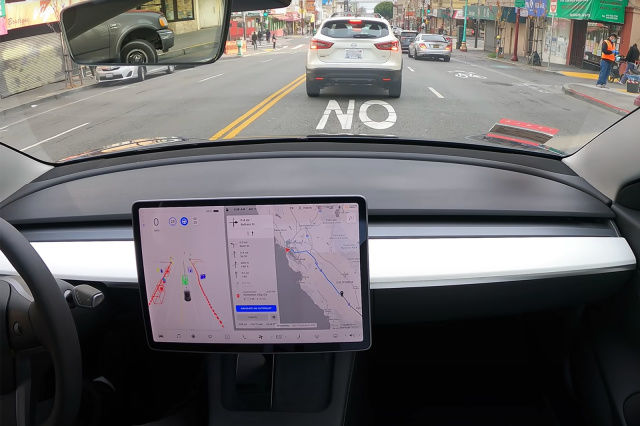 Tesla has started offering beta version 10 of its FSD option software to registered testers. The Tesla vehicle is installed by automatic update, and according to some user reports, it shows a dramatic performance improvement over the FSD beta 9.2 that has been released so far.

A Model 3 owner who has been participating in the FSD beta test since October 2020 said that on the first drive after the update, the FSD behavior felt much more familiar than before. For example, driving at intersections and roundabouts has become smoother.

Meanwhile, some testers say the FSD Beta 10 isn’t that different from Autopilot yet on the highway. These testers’ opinions can be interpreted as focusing on difficult handling while driving autonomously, rather than improving the FSD development capability entirely.

What is impressive is the video posted on YouTube by a tester registrant, easily passing through Lombard Street in San Francisco with FSD. It showed that even a living driver could go on a difficult narrow hill road without getting caught.

Elon Musk, CEO of the FSD Beta 10 release, is also self-proclaimed, saying that this update will shake his heart. Through the evaluation of FSD beta 10, there is a possibility that Tesla may release FSD beta 10.1 with further improvement for the next two weeks. CEO Elon Musk tweeted that when 10.1 is released, he may be displaying a button (Request FSD Beta) that will give those who haven’t participated in the test the latest FSD beta.

It is not yet known when the actual FSD will be released. Of course, FSD does not realize fully automatic driving as its name suggests, but Tesla owners who have paid an expensive option to add FSD hardware will still be able to improve usability by updating the Level 2 driving assistance system. Related information can be found here.