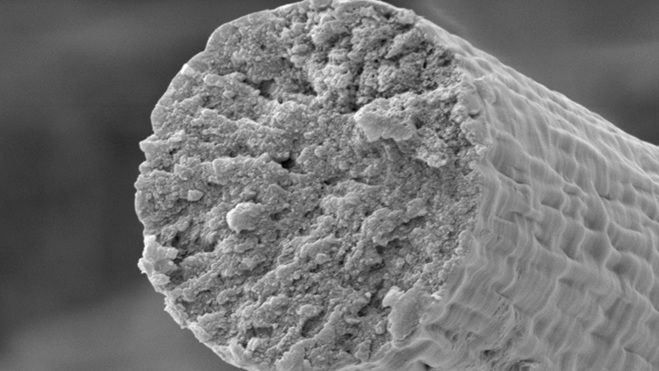 Artificial muscle fibers that are stronger than bulletproof vests with microorganisms…

Researchers at the University of Washington have announced that they have created artificial muscle fibers from proteins produced by genetically engineered bacteria.

The research team conducted an experiment to form fibers by polymerizing titin, a protein that makes up muscles, into genetically engineered bacteria. Since titin is the largest of the proteins known to exist in nature, bacteria to combine titin fragments were genetically engineered to create 2 megadalton titin, which is 50 times the size of a normal protein produced by bacteria.

The research team also built fibers with a diameter of 10 micrometers, equivalent to one-tenth the size of a human hair, by binding titin with the wet spinning method used for making cellulose. Structural analysis of this fiber was conducted by a research team at the same university, and it was confirmed that it has excellent toughness and strength, damping ability, and heat dissipation ability.

According to the research team, the strength of titin produced is higher than that of bulletproof vests. In addition, since this titin is almost equivalent to the protein contained in muscle tissue, it can be considered to have biocompatibility, and he points out that it has the potential to be suitable for tissue engineering used in suturing and regenerative medicine.

According to the research team, muscle fibers have been attracting attention for a long time with soft robotics, a robot that introduces bio-flexibility, and this attempt to make artificial muscles directly adopted the method of synthesizing the muscles in the body of microorganisms rather than collecting them from animals. The research team explained that this study can continuously create proteins with a higher degree of polymerization by polymerizing proteins obtained from nature in the same way. Related information can be found here.