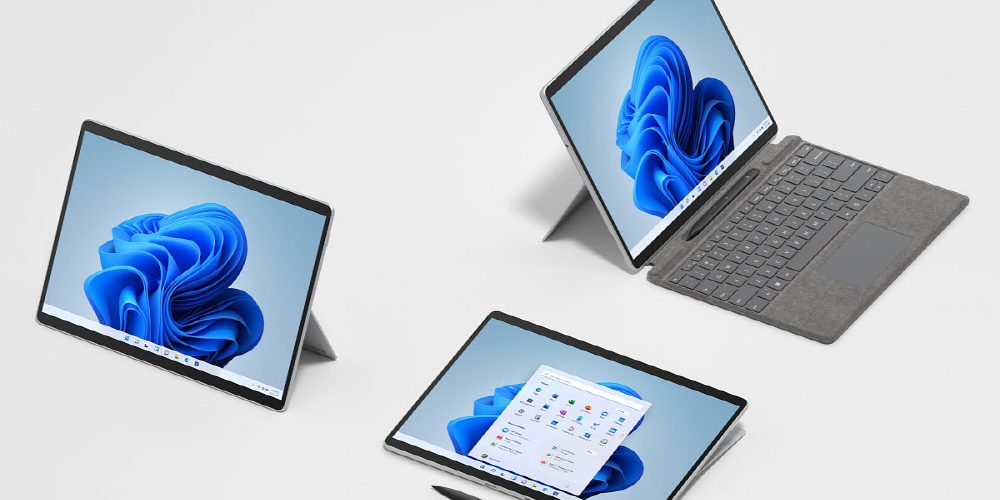 At the Surface event, Microsoft announced the new Surface series with Windows 11. Among them, the model that became a hot topic was the Surface Pro 8, a 2in1 model with an integrated keyboard. It is priced at $1,099.99.

The biggest feature of this product is that the body has been completely redesigned. The Surface Pro series is the same as before in that it was based on a 12.3-inch screen with an aspect ratio of 3:2, but this time, it faced a major change to the basic design level. Microsoft also claims it is the first major upgrade since the Pro 3 model.

The expansion terminal is also equipped with two Thunderbolt 4 and USB Type-C terminals, and the CPU, which is the heart of the heart, complies with the Intel Tiger Lake generation and EVO platform. In addition, the optional pen is equipped with a haptic device, so the feel is close to the taste of writing like paper and pen.

The TDP value, which affects the actual processing speed of the CPU, is 15~28W, which is the standard level for laptops. The built-in graphics are Intel Iris Xe graphics built into the CPU. In the case of corporate models, a configuration equipped with an LTE modem is also sold. The original Pro 7, which had a basic design such as a cooling mechanism, was followed, but parts such as a heat pipe were enlarged.

The display panel also draws attention. The highest refresh rate is 120Hz, so in light games, the display is smooth and visibility is improved. Also, the delay time can be reduced even when drawing with a pen. Windows 11 responds to a dynamic refresh rate that increases the refresh rate as needed, minimizing unnecessary power consumption like in a smartphone, while allowing the 120Hz display to be used only when necessary. The size is 13 inches.

In addition, it supports Dolby Vision in HDR video sources and Adaptive Color Technology, a window function that automatically adjusts color to match the ambient light in color expression. In addition, the ambient light sensor required for this function is mounted on the face recognition camera side. The resolution is 2880×1920 and the pixel density is 267 dpi.

As mentioned earlier, it is equipped with Thunderbolt 4 and USB Type-C, and the Surface Connect terminal that connects the power supply and the expansion unit continues to be adopted.

In addition, the battery life is 16 hours and the battery capacity is 50.2Wh. With the spread of remote work, the camera has also been renewed, and the rear camera is 10 million pixels and supports 4K video recording. The front camera supports 5-megapixel Full HD shooting. The Surface series also supports face authentication through Windows Hello, which is a form of adding the ambient light sensor previously mentioned.

The 14.1-inch screen has a resolution of 2400×1600 and an aspect ratio of 3:2, and the PixelSense Flow display supports up to 120Hz adaptive refresh rate, 1500:1 contrast ratio, Dolby Vision, and supports Surface Pen input via 10-point touch. Support. Here, it is equipped with USB 4.0 and two Thunderbolt 4 ports, a headphone port, and a Surface Connect port, along with a 1080p HD webcam and dual studio microphones. OmniSonic quad speaker that supports Dolby Atmos, and the network supports Wi-Fi 6 and Bluetooth 5.1. Battery life is 19 hours for the i5 model and 18 hours for the i7 model. The weight of the i5 is 1,742.9g and the i7 model is 1,820g.

It supports a notebook mode that uses a keyboard like a regular notebook, a studio mode optimized for touch and pen input centered on the screen, and a stage mode optimized for gaming or video viewing. Pricing starts at $1,599.99.

The Surface Go 3, which was also announced together, is a new version that succeeds the existing compact model, the Surface Go. The processor is faster with the new Pentium Gold or Core i3 and runs Windows 11.

Looking at the main specifications, two 5.8-inch PixelSense OLED displays with a resolution of 1892×1344, when unfolded into one, support 8.3 inches, a resolution of 2688×1892, a maximum brightness of 800 nits, a DCI-P3 100% wide color gamut, a maximum 90Hz adaptive refresh rate, and HDR support. The cover material is made with Gorilla Glass Victors and supports the Surface Pen.

The RAM is 8GB of LPDDR5 memory, and you can choose between 128, 256, or 512GB of storage. As mentioned earlier, it supports 5G and supports eSIM and nano-SIM dual SIM. On the back of the main body, it has a 12-megapixel wide-angle, telephoto, and ultra-wide angle, and supports optical image stabilization and phase-detection AF. The front camera is also 12 megapixels. It supports USB Type-C. It weighs 284g and is 5.5mm thicker than the first model, and 11mm when folded. In addition, the battery is 4,449 mAh, with a video playback time of 15.5 hours and a talk time of 28 hours. It also comes with a fingerprint sensor.

This product is an app optimized for two screens, such as editing e-mail, word, or Excel while viewing data, displaying both the face and screen sharing of a video conference participant in a large size, or displaying the app on both pages like the Kindle in addition to the left and right drag-and-drop method. It also supports Microsoft’s own apps mainly. Even when the screen is folded, the charge status, volume, and notification icons can be checked through the glance bar on the side. Pricing starts at $1,499.99. Related information can be found here.