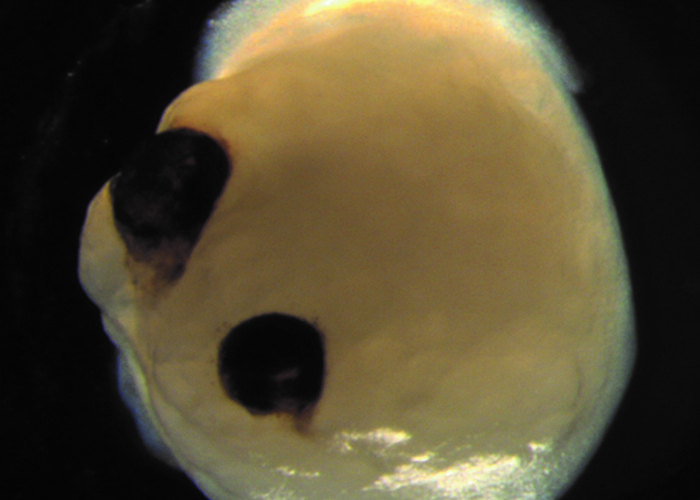 Eyeballs from mini-brains grown in the lab…

A paper was published on August 17 that successfully formed clear eyes equipped with an organ called the optic cup in the cultured brain. Small brains and eyes made in a laboratory to study the human brain have been confirmed to have neural tissue activity that responds to light, and are expected to be helpful in research on retinal diseases and the manufacture of medical retinas in the future.

Since this organoid system has a fairly simple structure, consciousness does not occur, but because it is a living tissue generated from human brain cells, it is helpful in elucidating the mechanism of nerve development, modeling brain diseases, and testing drugs.

A research team at the University of Dusseldorf Hospital in Germany studying the development of primitive eye tissue thought about generating eyes from brain organoids rather than directly culturing eye tissue, so they first prepared iPS cells from four donors.

Then, by applying the previously developed technology to transform stem cells into nerve tissue, retinol acetate, a type of vitamin A, was added to the culture medium to create a brain organoid with an optic nerve, a type of optic nerve. As a result of culturing these brain organoids, it succeeded in forming optic nerves in 72% of 314. The early ones formed eye cells 30 days after production, and mature optic nerves 60 days later. The rate of brain organoid development coincides with the timing of eye development in the human fetus.

The research team said that they knew that the mammalian brain had nerve fibers in retinal ganglion cells that extend out and connect to the brain, but this is the first time it has been shown in a laboratory study. The research team plans to develop a technology for long-term preservation of the optic nerve papilla and conduct research to elucidate the mechanism of retinal disease. Related information can be found here.