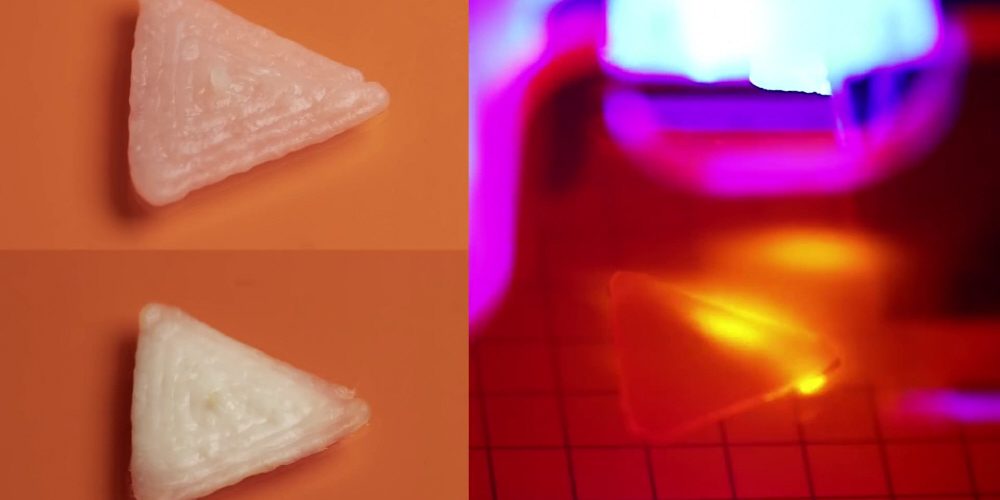 Recently, research using a 3D printer as a cooking appliance is being conducted, such as reproducing the complex structure of beef with a 3D printer and creating chicken nuggets with a 3D bioprinter. A research team at Columbia University has developed a digital recipe that not only prints chicken meat with a 3D printer, but also grills meat using three types of lasers.

Until now, meat was grilled using methods such as an oven or direct fire. The research team uses a laser to roast meat and let the fire go through the inside. First, the chicken that is printed with a 3D printer is pulverized with a food processor. These chickens are accurately printed and molded in 1mm units on a 3D printer. However, with the current molding technology, it is difficult to three-dimensionally print chicken, so it is molded into a thin chip.

There are three types of lasers used in this study. One is a 445nm blue laser. The other is a near-infrared laser with a wavelength of 980 nm, and finally a mid-infrared laser with a wavelength of 10.6 μm. The laser goes back and forth precisely over the chicken by repeating it several times. The research team looked for a pattern for making chicken efficiently by adjusting the diameter and number of circles.

The advantage of baking with a laser rather than a flame or an oven is that you can fine-tune the heating pattern. Unlike an oven or direct fire, where the whole thing is heated by setting a blue laser and monitoring the surface temperature of the chicken, laser heating is local and changes state depending on the laser output energy and frequency the speed of moving the laser. In the case of chicken, the state of fire is important, such as heating it to 70 degrees or higher to sterilize parasites and bacteria that cause food poisoning.

If the internal temperature rises quickly, moisture evaporates, which affects the texture of the meat. After roasting, the chicken shrinks and loses weight as moisture evaporates. Comparing the blue laser and NIR laser sintering, it was found that the blue laser tends to increase the chicken weight and volume loss. In other words, the NIR laser side is more juicy because it allows fire to pass while leaving more moisture.

The laser also passes through a transparent package, so meat can be grilled while still in the package. Finally, the MIR laser is fired, and the blue laser has the characteristic that heat penetrates further into the interior, while the MIR laser is suitable for grilling the meat surface. By distinguishing different frequency lasers, you can cook chicken rings with a moderately sizzling surface while allowing the fire to pass through the inside properly.

In the experiment, testers rated the laser-roasted chicken as tasty and juicy, but on the other hand, there were also opinions that when a dentist irradiates a laser to fill a tooth, it smells the same or has a slightly metallic taste. do.

The research team states that the contents of this study are basic and not immediately applicable. But in the future, he said, with full digital control over cooking, it could change the way you think about food. Related information can be found here.