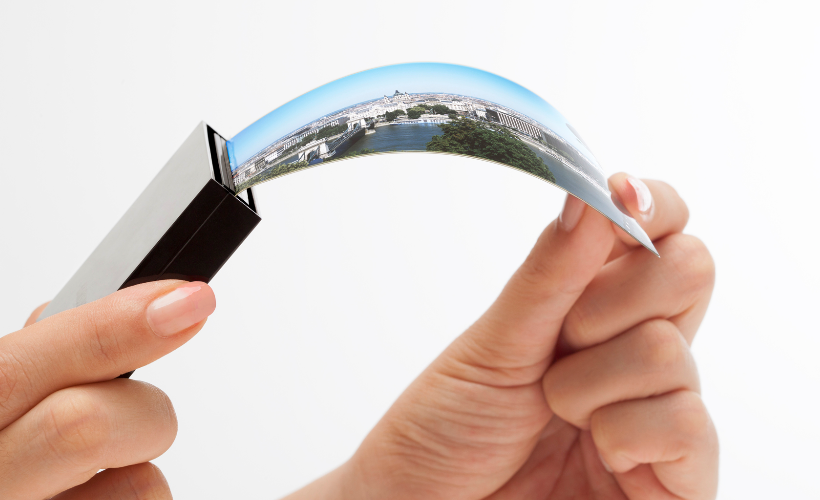 I have been using tempered glass such as gorilla glass for smartphone panel. However, even if you use such tempered glass, it may fall into a state where it is big and small cracks on the screen, or even if it does not function properly. So far, many companies have developed a display that does not break, but Samsung Display succeeded in developing related products this time. Of course, this product is not developed right now. Display Week 2017 (Display Week 2017), which was held last year, was the product development and exhibited. The unbreakable display, developed by Samsung, has a resilient power that can be restored to its original state even when the distortion reaches up to 12mm. It also has a bendable feature, which makes it possible to realize a curved display.

According to the US Underwriters Safety Testing Center, the unbroken display passed 26 consecutive falls at a height of 1.2 meters. In addition, the operation test in the environment of minus 32 degrees at 71 degrees passed without any problem. Not only did he pass the durability test according to the US military’s military standards, but he did not find any scratches even if he dropped the test at a height of 1.8m above the test standard.

The unbreakable display developed by Samsung Display has been UL certified and objectively verified and certified. If so, what kind of changes can you think of when such a product appears? Rugged products such as tough books can also be used for military equipment panels. In addition, the possibility of using a display panel for a vehicle can be considered. Companies such as Tesla are already using display panels to eliminate complicated buttons, but the space for the display panels in the car will increase more as the electricity level changes and the self-driving level goes up.

In fact, Corning, which develops gorilla glass, announced Gorilla Glass for Automotive, a gorilla glass product for cars during CES 2017 last year. This product is an improved version of gorilla glass, a much higher temperature, solar, and solar-related strength than the smartphone. When applied to dashboards and displays, it is lighter than conventional glass, but it is thinner and has higher strength, which means that the impact resistance is doubled. In this respect, it can be expected that the use of the display in automobiles will increase.

Another area of ​​application is the folding smartphone. The unbreakable display can be folded as mentioned above. In 2016, Samsung Electronics applied for a patent on a folding smartphone. Looking at the image of patent application filed by Samsung Electronics at the time, it has a corrugated structure in the middle of smart phones and it has the potential to change into various forms. It is also possible to use a folding phone to adjust the folding angle of the wrinkles to make a phone call, or a flat phone when browsing the web. In addition to this folding ceremony, Samsung Electronics filed a patent for a large-screen display that was folded after two screens were opened. The fact that Samsung Electronics is already enthusiastic about the development of folding displays that have been in use for several years can be expected to delay the patent application. Meanwhile, according to last year’s report, Samsung Electronics competitor, Apple, is also co-developing with LG Display as a folding iPhone development partner, and it has been revealed that a foldable iPhone will emerge after 2020. LG Display has teamed up with Apple to develop foldable OLED panels, and LG Innotek is preparing to develop the necessary flexible circuit boards for OLED panels. Apple has been developing the major parts of the next iPhone to share with partners over the past year, but Apple did not want the OLED panel form factor required by its competitors to be exposed, ”

LG Display has also successfully developed prototype OLED panels for folding OLED panels two to three years ago. Although yields can be significant when mass production of tens of millions is inevitable, Samsung Electronics is forecasting that it will release a foldable Android smartphone this year, and Apple is expected to announce a delay of around 2020 or a year or two There is also a possibility that it may be possible. Anyway, this unbreakable display is a step closer to realizing this folding smartphone.