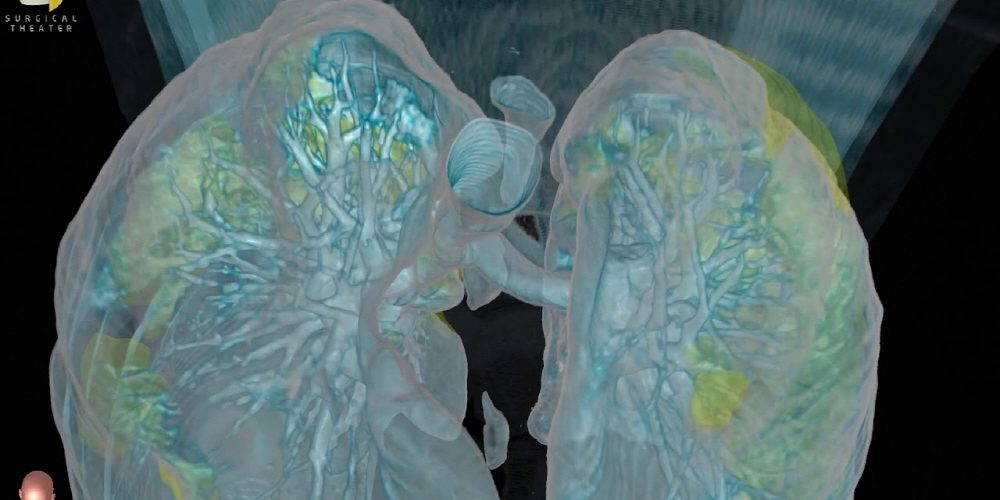 Lungs of patients infected with COVID-19 in virtual reality

The main symptoms of Corona 19 include fever, cough, and phlegm, and when it becomes severe, it is known that high fever, bronchitis, and pneumonia occur. It is said that the George Washington University hospital has created a model that can reproduce the lungs of severely ill patients infected with Corona 19 from real data in 3D CG and check them in virtual reality space.

If you look at the image, you can see the patient’s lungs wrapped in the sternum and ribs if you look at the chest reproduced with a 3D CG model. The translucent blue part is the lung, and the infected area is yellow. The damaged area is spreading in the bronchi. This model is based on actual data such as CT scan of the patient.

Since it is a virtual reality model, you can also observe the lungs inside the bronchi. From this, it can be seen that the entire lung is being damaged by Corona 19. This model was jointly developed by George Washington University Hospital and Surgical Theater, a medical virtual reality company.

Dr Keith Mortman says that visualizing the lungs of a patient with Corova19 with Surgical Theater’s software has found that rapid damage leads to the entire lung and requires a higher level of treatment than a ventilator. Venous blood was taken out of the patient’s body and carbon dioxide was removed from the artificial lung, and at the same time, ECMO (Extra corporeal membrane Oxygenation) was treated. He said that if pneumonia remains for a long time, it can cause long-term diffuse damage to the lungs, affecting breathing ability, suggesting that the lung damage caused by Corona 19 may be permanent. Related information can be found here .