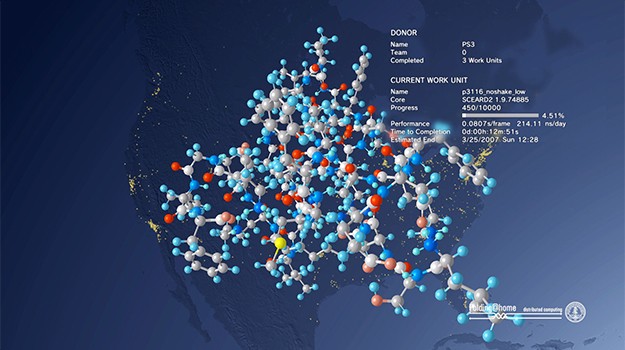 Folding at Home exceeds the combined performance of TOP500 supercomputers

Folding@home is a project that analyzes the three-dimensional structure of proteins through distributed computing that combines the computing power of familiar systems such as PCs, game consoles, and smartphones in homes around the world, and is also showing power in Corona 19 analysis. As a result of the world’s attention to Folding@Home due to Corona 19, it is said that Folding@Home’s computational processing power has reached superior performance than all of the world-ranking TOP500 supercomputers combined.

As of April 14th, the result of comparing folding at home computing power with other supercomputers was disclosed on Twitter. Folding at home is 2.4 exa, which is 15 times faster than IBM Summit, which boasts the world’s fastest processing speed. It has reached the flops, which is faster than the combined computing power of the TOP500 supercomputers.

IBM Summit integrates multiple CPUs and GPUs, but Folding@Home is a distributed computing project that sums up the processing power of home devices around the world. Since Folding@Home’s processing power is proportional to the number of users participating in the project, so-called popularity depends on its capabilities. It is directly connected. Folding at Home started on October 1, 2000, but there have been ups and downs in processing capacity for 20 years from the start to the present.

The first peak in the processing power of Folding at Home was the Sony PlayStation 3 game console. With the advent of Folding@Home for PS3, Folding@Home PS3 participants reached 1 million and the processing speed reached 1 petaflop for the first time in distributed computing. However, Sony stopped offering Folding at Home for the PS3 in 2012, and as users of other platforms fell away, the total number of users remained at 30,000 in January 2020.

However, the turning point in February is coming. The total number of Folding@Home users surged from 30,000 in March to 400,000. In April, it surpassed 700,000 again. As the specifications of the user are also in a state of significantly higher, it is explained that the processing speed is too fast at the present time and the server side is overloaded.

It was Corona 19 that created this situation. Folding at Home is contributing to 233 research papers, including important studies such as analysis of the protein structure of antibiotic-resistant bacteria and Ebola virus. It was used not only for folding at home, but also for Corona 19 analysis, and Nvidia officially tweeted to help GPU computing power to fight Corona 19.

There are several projects that analyze the new Corona 19 using the computing power of Folding at Home. On April 13, a study related to the protein RNA-dependent RNA polymerase RdRp, which is responsible for the ability to replicate inside Corona 19, was announced. Most of the vaccines currently under development target the Corona 19 surface antigen, but it is highly likely to evolve to have drug resistance due to this surface antigen mutation, and the possibility that the vaccine developed by mutation will become useless is also pointed out. However, according to the research team, RdRp is promising as a drug because it is difficult to study because it is located inside the virus, but it is very difficult to mutate. Related information can be found here .