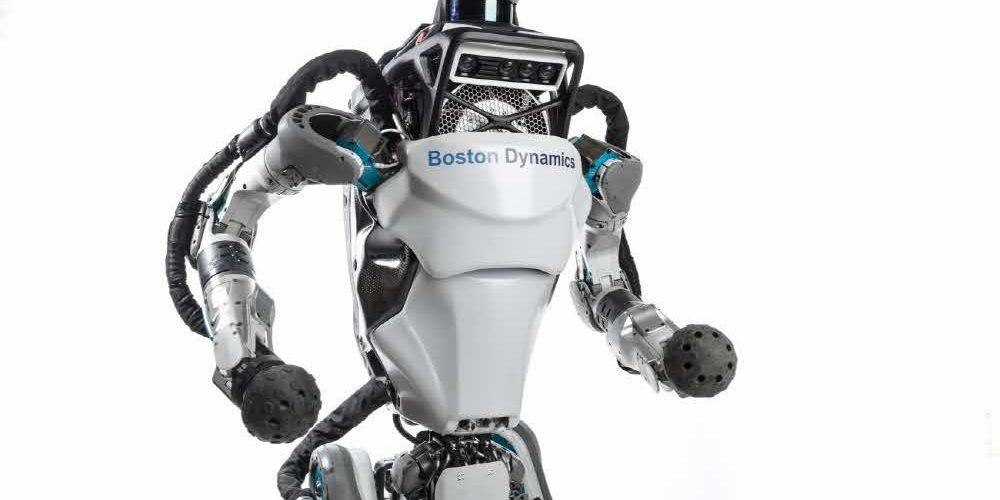 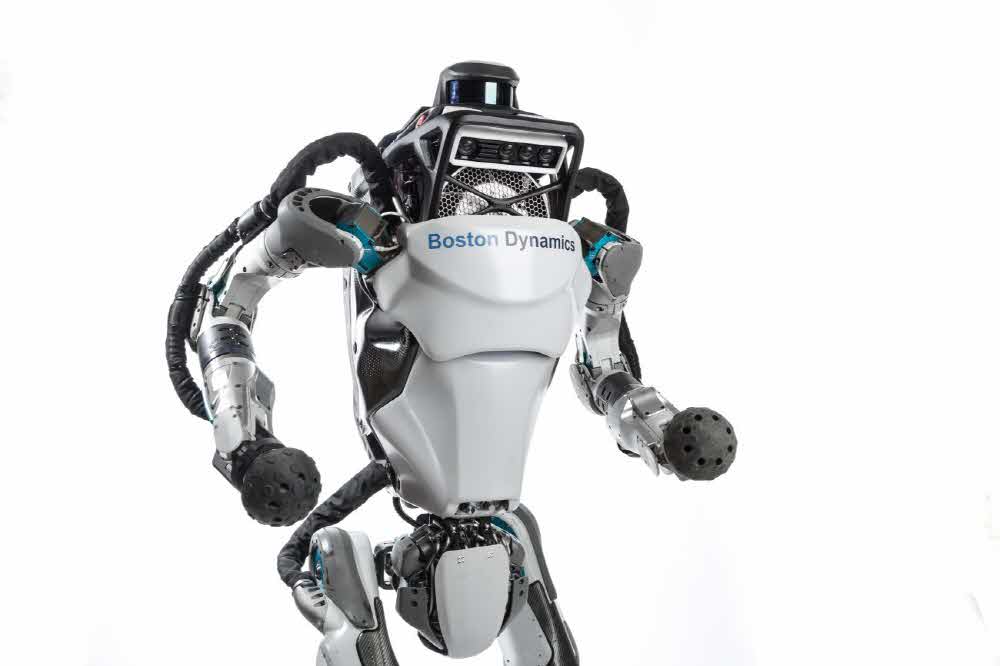 Boston Dynamics has been a member of Google since 2013, but is now a robot development company under Softbank. The latest video of the humanoid robot Atlas, which the company unveiled on May 10 (local time), runs as smoothly as a human being.

Atlas in video runs like a light jog on the lawn. Shaking his hand while bending his knees, it shows that running is close to human level. Of course, even if there is a slope. When you meet an obstacle, jump and jump again as you showed before. This video shows that Atlas has improved to a significant level.

Atlas has also made a spectacular aerial bag tumbling through the video released last November. It does not stagger and shows stability even when landing and jumping on the table without losing balance. The same is true of back-tumbling. Fold your knees quickly in the air, stretch yourself before landing, and bend your knees slightly so you can absorb the impact.

You can see that Atlas is evolving steadily from the previous images of Atlas. Self-supporting gaits have already been made long ago, and even if humans interfere, they continue to perform their duties. In the old video, people put a 4.5kg box on the shelf and hit the atlas or drop the load. However, despite these hindrances, there is a scene in which Atlas continues to carry on his mission. Also, if you fall down with a stick, it will spring up like it pops up.

Atlas also shows elaborate movements such as housework, cleaning and chores. Lift the cardboard box on the ladder and move it to another place or clean the trash with a rag. Also use a vacuum cleaner to clean. Robot cleaning using machine. Of course, I press the button on the vacuum cleaner and push the head part parallel to the floor, and work like a person.

This is not the end of the video. SpotMini, a four-legged walking robot that was unveiled on the same day by Boston Dynamics, is a self-determined walker. Turn the camera unit forward, backward, left and right to determine the surrounding situation and then run. Judging the situation around yourself, choosing the way to run. Of course, if you look at the video, there are QR codes for every spot minis, but this is for measuring the performance of the spot minis. Spot Mini sets the shortest path by itself. Boston Dynamics’ internal passageway, which is the location of the shooting, not only detects everything but also detects the walls and stairs from the outside.

Spot Minis also saw a video released by Boston Dynamics last February, and when you see the door in front of you, you can see another Spot Mini with a big arm coming up and opening the door. When you open the door by hand, another Spot Mini will lightly pass through here. It is as if the two spot minis depend on each other and collaborate through obstacles called doors.

In fact, in this scene, Spot Mini was directed only to go at the door, but all actions such as finding and holding the handle were judged by Spot Mini. Spotmini has an accident plan to deal with the ability to solve a given task even if it receives external interference. Spot Mini judged the situation himself and went out the door.

The Spotmini, which is ordered to go, recognizes the handle through the camera attached to the arm and the body camera recognizes whether the door is closed and collects the information necessary to open and close the door. The software in the body recognizes all necessary actions such as body movement and balance, and performs all tasks necessary to complete the mission. 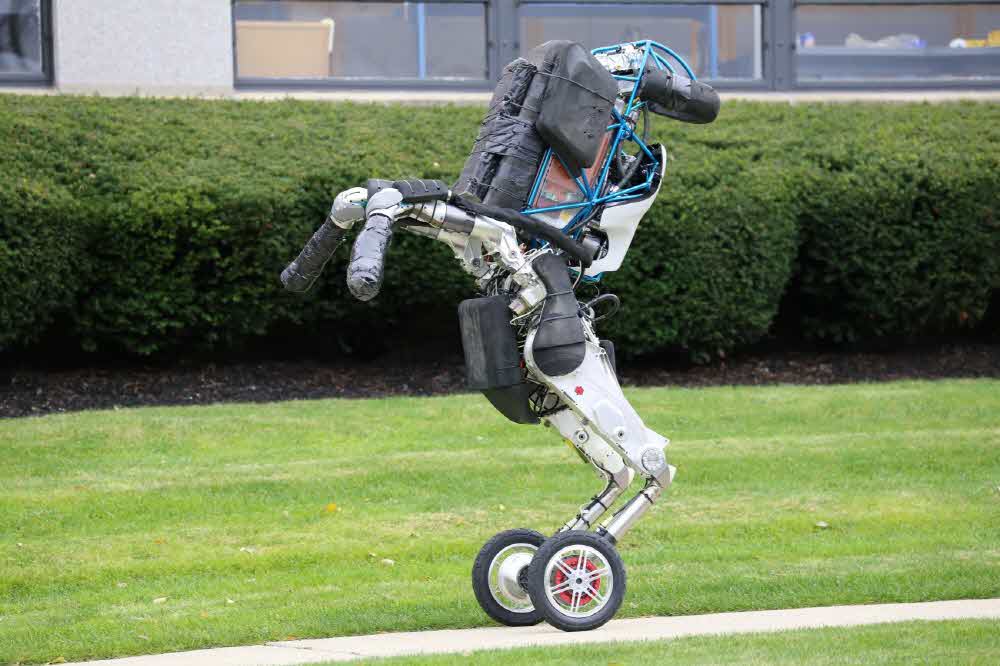 The new Handle, a new robot released by Boston Dynamics in 2017, has been shown to have amazing athleticism, such as jumping, carrying loads up to 45kg, and running easily in snowy places.

The steering wheel is attached to the wheel. I bend my legs and run as if I’m skating ice skating. The maximum speed is 14.5 km / h. It runs quickly on the wheel but keeps the balance center by setting low center of gravity. Jump on the table and jump safely as you land on the floor. The handle can be dumped up to 1.2m. In addition, it can travel without reducing speed even with 45kg load.

Robots are still evolving. Even if it was not a Boston Dynamics robot such as Atlas or Spot Mini, MIT research team recently unveiled a fish robot that used a so-called SoFi. It is now being developed to use diver or tam submersibles, but to make marine life naturally observable. In the public image, Sophie naturally swim about 15 meters below sea level. Of course it is possible to swim freely without having to manipulate with the remote control. It is also a fish to swing gently while shaking its tail.

Sophie is made of light material and can float on its own buoyancy. It has a small motor and an electronic controller inside it, and uses a small hydraulic pump to move the tail. The body made of urethane material is said to have made a lot of details for smooth movement. This also has the effect of boosting buoyancy.

The exterior is covered with silicone material and soft plastic, which means that the risk of damage is small even if you hit rocks or fish around. It is designed so that there is little need to make an effort to keep it from sinking in water. This also means that you do not have to worry about whether dangerous obstacles are around you. You can record your surroundings by swiming with a camera. The researchers plan to add cameras that can automatically track fish movements in the future.

Sophie uses 30-36 kHz ultrasound to communicate. Sophie tells her to come up on the surface of the water and lifts her body up to the surface. It is easy to recover even if it is able to hit swim so that we can know near ship. The body also has an internal buoyancy control mechanism that can swim at various depths. As you can see from the above examples, we can see that robots are evolving in various ways.