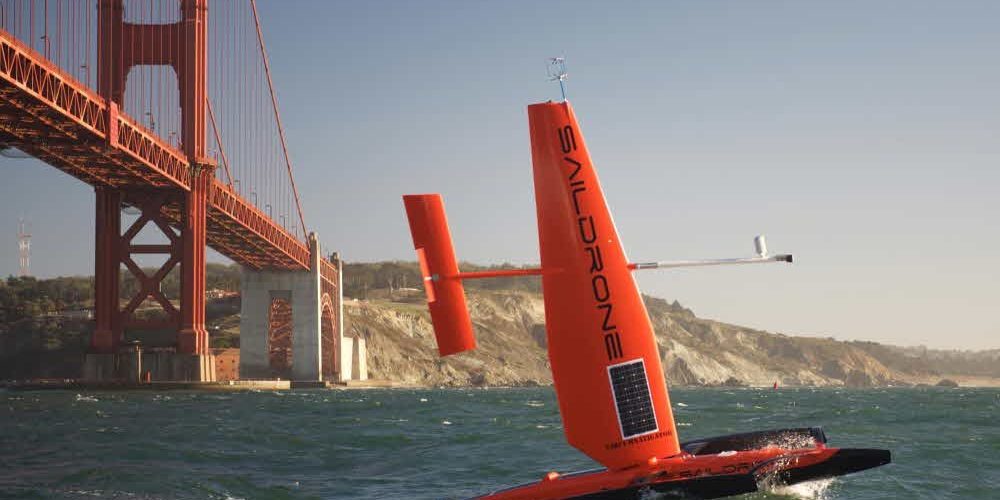 The drones are already using B2C as well as B2B to increase the utilization rate, such as topographic survey linked with delivery and GPS. It seems that companies such as Amazon and Seven-Eleven are using drones to innovate logistics, and businesses such as Airbus are developing drone taxi to dream of transportation innovation.

However, drone innovation is in the midst of not only sky but also marine. It is a yacht type drones equipped with solar cells and GPS. Saildrone ( https://www.saildrone.com ) is a drones startup founded by Richard Jenkins. Richard Jenkins is a Land Yacht who has challenged the world record of landing on wind with a mast and a sail on a wheeled body. He set a goal to break the world record of 187km / h. I thought I could break the record in about a year, but it really took 10 years to update the record. He succeeded in driving the world’s fastest 203km / h in 2009. This record has not been broken yet.

This is the area where Richard Jenkins threw a new challenge: the unmanned yacht. He has never traveled around the world as an unmanned yacht, and expects to be the first to make a record if it succeeds.

He aims to fly around the world in 2013, the world’s first self-sailing robot yacht, a drones to create a sail from San Francisco to Hawaii. Thanks to the investment of $ 90 million from investors, the company set up Saildron, a mullin drones startup in Alameda, a port city in California.

Saildron is using its headquarters as a building originally used as an aircraft maintenance warehouse. There are 20 unmanned yachts equipped with numerous equipment such as GPS and solar cell. Saildrons are designed to navigate for months, transmit information from sensors and cameras to satellites, and view them remotely in real time.

Saildron began an activity this year to investigate an area called the White Shark Cafe, located between Guadalupe and the Hawaiian Islands in the Pacific. The reason why white sharks are gathered here for several months is unknown. Scientists naturally asked questions and asked the Saildron for cooperation. Saildron cooperates with Stanford University to send unmanned yachts to the white shark Kepa to investigate the white shark ecosystem.

Unmanned yachts may be ideal for this mission. Unmanned yachts are cheaper than the larger research vessels commonly used in research. In addition to this, it is possible to collect a lot of information because it is equipped with equipment to measure hydrogen ion concentration, chlorophyll, humidity, radiation dose, wind speed, temperature and so on.

The object that is as interested as a shark is that it is useful for investigating the weather. You can expect accurate climate data and weather data. Unmanned yachts can also be sent to hurricanes for information. This will allow us to predict more accurately the strength of the typhoon or the landing point. Weather information can be of great value as it can have a profound impact on the financial market depending on the weather.

Of course, the sails in regular yachts can not stand the winds of the typhoon, but the unauthorized yachts made by Saildron use vertical sails for land yachts. To control yacht propulsion, I put a small tab like a wing that changed the airplane posture. The tap can prevent the yacht from becoming out of control by blowing strong winds. It should also be remembered that even if a general yacht can not control its attitude, the robot yacht will be able to control its condition more easily and make accurate voyages. Sailron’s unmanned yacht has sailed about 370,000 kilometers in four years to date. However, it is said that there is not a scratch yet. 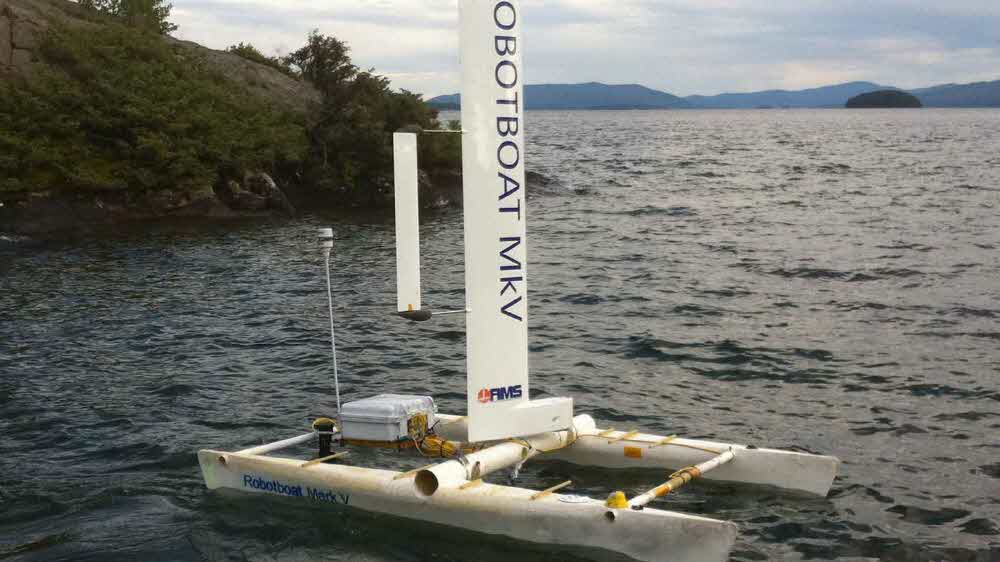 Similarly, a company called Autonomous Marine Systems ( http://www.automarinesys.com ) will launch a fully automated, robotic boat mark VI (Robotboat Mark VI). It is equipped with a camera and GPS, as well as a sensor that can measure water quality, temperature, oxygen amount, radiation dose, etc., so that it can be remotely surveyed the whole world without being aboard.

Robot boats can be said to be satellites floating in the sea. You can get information on how much waste is in the ocean or in the Pacific Ocean, ocean currents, icebergs, coral reefs and marine life. Solar panels are mounted on the hull and run on solar energy without fuel. With GPS, you can see the route and make remote measurements.

Attempts to use drones at sea have already taken place in many companies. The most active of these is Rolls-Royce ( https://www.rolls-royce.com ), which develops luxury cars and aircraft engines.

Rolls-Royce has been developing unmanned drone ships early on. It has been developing drones since 2014. Rolls-Royce is supposed to control hundreds of transports from virtual bridges on land in the future. Although air cargo is high, maritime transport still accounts for 90% of the world’s freight volume. In the $ 375 billion marine transportation market, it is hoped to develop a droneship in a safe, cheap and environmentally friendly manner.

The crew costs account for 44% of the total operation cost of the ship. Drones can benefit from being able to reduce operational costs and to control them remotely in the office.

It can be said that drone ships are already feasible on the technical side rather than on the ground which should consider complicated traffic situation. However, there are regulatory hurdles here and there may be opposition from existing shipping operators. For example, there are many places where there are minimum number of people in ships of 500 tons or more, so drone ships are illegal. However, if this problem is solved, it is relatively more realistic for the shipping industry to introduce it.

Dron boats have the advantage that they can increase their cargo volume because they do not need the accommodation space, power, air conditioner and water required for the crew. It can save 5% of the weight of the hull and save 12 ~ 15% of the fuel cost for the operation. It can also be expected as a countermeasure against pirates.

Rolls-Royce plans to introduce drone ships first in areas such as container ships and dry bulk carriers. However, it will take time to convert dangerous goods such as oil and liquid gas into drones.

In 2016, Rolls-Royce also unveiled images of drones carrying unmanned freight. In this video, we have a future ship management system based on the oX concept (Operater eXperience), which manages the drone ship on the ground in a virtual bridge and remote control room. Vessel Traffic System (VTS), a vessel called the marine traffic control system.

The remote control room is managed by a huge display and hologram showing ship information from around the world. The operator can sit on the chair and manage the vessel based on the information displayed on the display. If an error occurs on the ship, artificial intelligence notifies the operator of the response, and informs the operator of the countermeasures and waits for instructions. When the operator instructs the operator to make a diagnosis, he or she confirms whether there is an abnormality in the GPS or the communication device. If you check the hull over the hull with the drone on board, you can also exchange parts. Rolls-Royce intends to enhance the safety, efficiency and handling of future vessel operations in the control room. Last year Rolls-Royce announced plans to develop a naval automatic drones vessel capable of carrying out military operations using unmanned drone ships. A full-automatic military ship is 60 meters long and weighs 70 tons. It has a maximum speed of 46 km / h and a cruising range of 6,500 km. It can continuously travel for more than 100 days. It is equipped with a diesel engine, but it can be replaced by a gas turbine due to its high design freedom and can be powered by a 3,000 kWh solar panel on board.

A fully automatic drone ship can patrol or surveillance. You can also take on the escort of Yoon-seon. Of course, there is no crew compartment that is essential for existing large-sized vessels, as the crew can perform almost unnecessary unmanned operation. It is expected to save labor costs, and it will be able to carry on a stable mission by continuously operating 24 hours a day. Rolls-Royce believes that if the unmanned drone ship is developed and introduced into the Navy within the next decade, the concept of fleet management that connects manned and unmanned ships together will develop.

The most noteworthy area for the drones is the logistics innovation as well as the sky drones. The development of drones ships is likely to bring a new wave of change in maritime logistics.