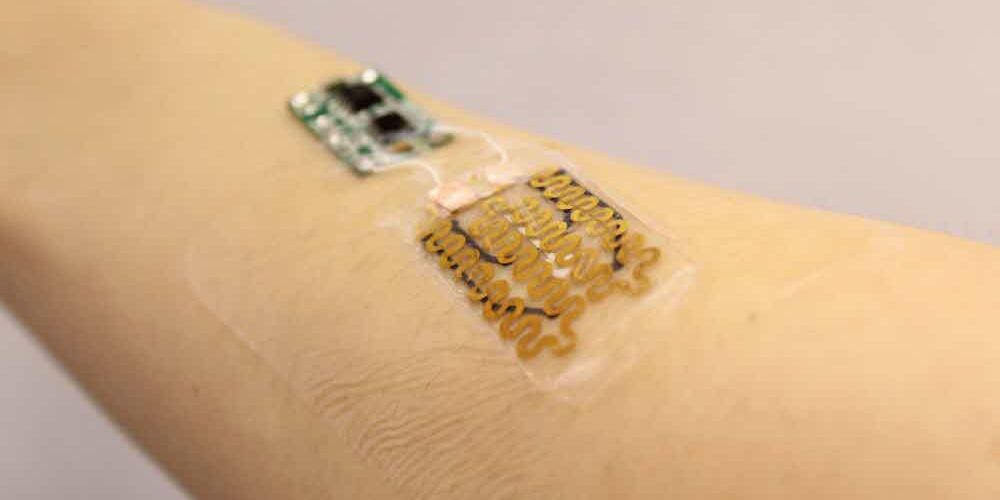 A bandage from the future If the human body is wounded, it is natural healing even if left alone, but there are cases of infection. In fact, infection is one of the major causes of non-traumatic limb amputation. It is not something to look at lightly. More than 25 million people in the United States face such problems. Of course, it is possible to increase the treatment rate even if the drug is administered properly. The important thing here is that it should be appropriate. Regardless of the individual’s will, such as “It would be all right if it hurts,” it is likely that this kind of medication will be possible if you have a smart bandage with a built-in medicine.

Professor Sameer Sonkusale, Professor of Electrical and Computer Engineering at Tufts University, says chronic wounds are on the rise as lifestyle-related diseases increase. The researchers developed a smart bandage to counteract these injuries. Successful healing of the wound will result in a pH value of 5.5 to 6.5. On the other hand, infected wounds show values ​​higher than 6.5. To this end, a smart bandage has built in a sensor that detects the pH value and temperature so that the wound healing status can be confirmed.

Of course not here. When necessary, the microprocessor heats the gel and releases the drug based on the data read by the sensor. It is a matter of knowing the condition of the wound and taking medication. The thickness of the smart bandage is less than 3mm. The microprocessor part is also reusable. Another advantage is that the microprocessor-free parts can be made for one-time use at low cost. Thus, if only the internal sensors and the antibiotics according to the symptoms are changed, the smart bandage can be used not only for the wound but also for a wide range of fields.

Already, attempts to combine technology and medicine have been going on for years. This smart bandage to heal wounds is the same as the attempt to improve the first syringe that comes up in the hospital. The history of syringes is long. It began in 1853 with the patent of Alexander Wood, a doctor from Edinburgh, Scotland, dating back to the 19th century. Having a history of more than 160 years.

Unlike bandages, the most important advantage of injecting vaccines is that they can be vaccinated and vaccinated directly. By making antibodies in the body to boost immunity, it can weaken the pathogen – causing pathogen. I still use syringes for vaccination.

The problem is the syringe itself. If you were a child, you know, but by the seventies there were no disposable syringes, so I had to disinfect the syringes and needles. Once it is used, it is disinfected by fire and then reused. Aside from this problem, because the needle itself is pushed deep into the skin, a survey found that 20% of respondents feel fear of needles. It is highly rejective.

The bigger problem is that even in the underdeveloped countries, there is no need to sterilize the flames at the same time. The risk of secondary contamination can be increased. In fact, according to WHO, 1.3 million people die from secondary infections for this reason.

In 2014, Mark Kendall of the University of Queensland Institute of Biotechnology and Nanotechnology, Australia, gathered his eye on Nanopatch, a replacement for syringes. The nano patch takes the form of sandwiching between the thumb and forefinger. There are about 400 small protrusions on the skin contact surface. This is a substitute for a needle. All the compact and small needles are molded using semiconductor manufacturing technology. Using nano patches is simple. Put the vaccine on the needle area and attach the vaccine to the skin when needed. It is said that it is possible to put it on the skin if it is only pressing on the arm part and naturally there is no pain at all. The nano patch needle penetrates the cuticle skin and inserts the needle to the inside where the vaccine works most effectively. The needle actually discards this part through the tube, but the nano patch is to inject the needle into the effective position. Thanks to the syringe, if you have to administer 6,000 nanograms of vaccine, 6.5 nanograms of nanopatch can do the same thing. It is like reducing 10 dollars to 10 cents. This can be expected to dramatically reduce costs.

In addition, existing vaccines do not deteriorate when transported by cold chain, but nano patches can be in general dry condition instead of refrigerated condition. If it is stored at 23 degrees, it can be maintained for one year without deterioration. In fact, in Papua New Guinea, there are actually only 800 vaccine storage refrigerators. There are many things that are old. Nano patches can be an alternative to cost and storage issues.

That’s not all. In the same year, VetiGel, a futuristic bandage gel that gives blood clotting effect and prevents scarring, was released when the gel form substance is applied to the wound area. It was developed by the company that changed its mission to Suneris, now Cresilon.

At the time of the release, the animals were injured with a scalpel, and the bleeding state was reproduced by flowing the actual blood through the insertion tube. If you spray Beti gel, bleeding stops in a few seconds. Beti gel is mainly made of plant-derived polymer chemicals. It has the property of adding animal body temperature and solidifying. It forms a structure similar to that of the new tissue and prevents bleeding. If a wound is present and bleeding is present, sprinkle Beti gel on the area. As the blood clotting occurs, bleeding stops quickly. Betty Gel, which has become unnecessary due to its generous sprinkling, can be easily removed using a special treatment agent. According to the company’s statement, Beti gel is a substance that activates the coagulation action in the blood. It is made of a biocompatible material and is also a substance that naturally absorbs into the body. It reproduces a state similar to the cells existing in the skin, thereby promoting the production of fibrin having the function of promoting hemostasis by coagulating blood. It can cope with small wounds and massive bleeding due to coarse blood vessel damage. We can expect effect in place where there was not medical facility and sufficient measures were difficult. Beti gel exerts excellent coagulation action just by applying to wound area. It can be expected to have an immediate hemostatic effect, and it is also advantageous to have a long-lasting effect.

Beti gel has been made with plant ingredients as its main ingredient, and it has high durability and absorbency. You do not need to know special preparation or methods. It may be stored in a syringe for application at room temperature.

Attempts have been made to improve convenience and healing effects by combining techniques such as a bandage and a syringe.