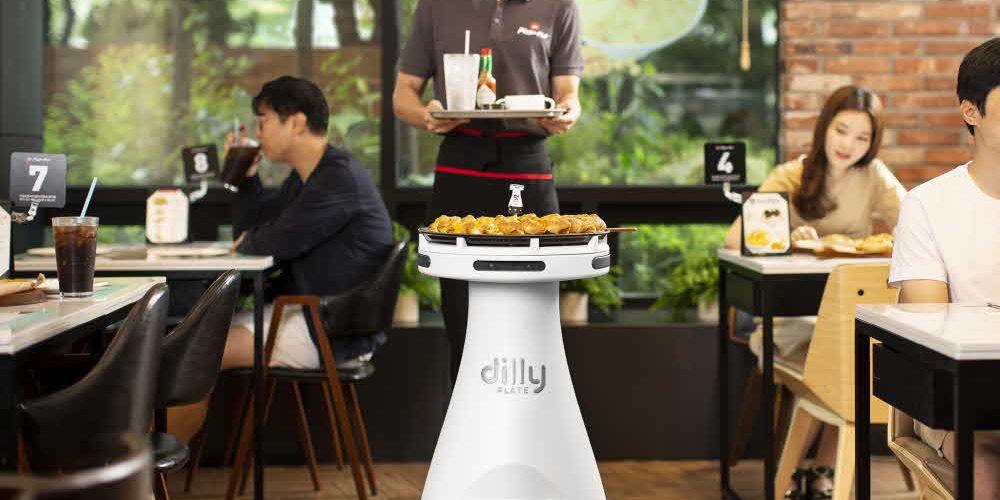 The future of delivery, Catch the Last Mile. Technology development for logistics innovation is being carried out all over the world. One of the eye-catching targets is robot shipping. Domino pizza has been testing robotic pizza delivery service since 2016. The pizza delivery robot, which is in tandem with British startup Starship Technologies, will deliver pizzas and beverages and self – drive food to customers’ homes within a mile radius of the store. Food delivery time is said to be within 30 minutes. The six-wheeler delivery robot that StarSight Technologies has already tested in over 100 European cities. Alibaba also presented a shipping robot called G Plus (pictured below).

Last mile means the last stage of logistics delivery to the final destination. Last mile is important because it is the closest point to meeting consumers. The reason for competing for delivery speed in logistics such as same-day shipping or early morning delivery is also to increase customer satisfaction at the closest point.

Of course, on the other hand, you can expect realistic benefits of cost reduction, according to StarSight Technology, according to one operator can manage up to 100 robots, he said. The cost of delivery is also 12 pounds a dollar on average in the center of London, but it can be drastically reduced to a pound. For this reason, overseas companies such as Nuro have already been working on a grocery delivery test with Kroger, a US distributor, and have started a self-propelled delivery robot, such as Robby Technologies or Dispatch. Many of them are in appearance.

In Korea, well-known brothers and sisters are well-known for delivering ethnic service. Elegant brothers first performed their first public test of their food delivery robot Dilly at Cheonan Yaurifood Street for two weeks from June 1 to 14. A general public test was conducted. Of course, Dili took the best route from the food court to the table where the customer sat at the designated place, and took the self-driving, indoor delivery to deliver the food.

Elegant brothers also conducted a public test in the Mokdong Pizza Hut store in Seoul from August 6 to 19. In this test, Dili is different from the first. Of course, Dilly Plate is certainly a restaurant serving robots. It literally serves food for the customer on behalf of the clerk. Dili is a form of opening a slot when an app is ordered directly by an app, but Dili Plate is literally a serving robot controlled by the store.

From the specifications that have been disclosed once. The Dili Plate is equipped with a 2D rider, a spatial data acquisition sensor and a 3D camera. Elegant siblings say this is sensor fusion. Anyway, thanks to the explanation, it is possible to carry out sophisticated operation up to cm unit. At the bottom, Softbank Robotics had two wheels, like Pepper. In the upper part of the face, the face of the robot, instead of the face, has a tray (tray) for placing the food plate. The tray can hold up to 22kg of food. In addition, we have a weight sensor and when we lift the tray to the destination (table), we send a voice message saying “Eat delicious”. In addition, it is not likely to be in the room where charging is easy, but if it is fully charged, it can run continuously for eight hours. Dili Plate supports voice function. However, only the 12 pre-set voices actually can be played by Dili Plate. It does not include speech recognition assistant features such as Alexa. You can set it in the manager’s interface. The voice recorded in the field in advance is the driving sound, I brought the food, I enjoy it, I take the food, I congratulate the winner !, Excuse me, I am at home, I eat good pizza, I do not have ears, I congratulate the winner, I introduce Dily, I go to bed. As mentioned earlier, Dili Plate is different from Dili, whose elegant siblings showed up in the first test. right. Dili, who appeared in the first test, was made by Professor Jung Woo-jin of Korea University. On the other hand, Dili Plate was developed by an elegant brother – invested robot startup, Bear Robotics (https://www.bearrobotics.ai/).

Actually, the two robots are totally different. Not only the appearance, but also the operating system and the design itself, it is a different brother. Right now, it is said that it does not share the operating platform or anything.

Dili Plate itself is in version 1.0 right now. As mentioned earlier, the company is also considering voice recognition, but will add features such as a number of trays, wireless charging and automatic docking. This means that if you look at the current version, Dili Plate is only one way for voice. In other words, you can not get an order. Dili Plate has said that it runs autonomously, but strictly speaking, it is a structure similar to a huge robot cleaner. When the Dili Plate is placed on the shop floor, the robot moves around, mapping the interior space of the shop. Then, through the administrator’s software, you specify the table number from 1. That’s it. Now, when the customer enters the store (in the case of pizza hut), go to the clerk and order the menu. When you are seated, if the food is ready, the clerk loads the tray on the dili plate and presses the corresponding table number on the manager’s page. This way, Dili Plate delivers food to the table. When the customer lifts the tray, he / she gives a voice message saying “Enjoy it” and then returns to the counter.

The dili plate body is equipped with a rider and various sensors (such as an obstacle detection sensor or a position estimation sensor) and a camera on the upper and lower sides of the main body. It seems that only the front part of the main body is recognized, and the sensor part is arranged in the front side. The administrator page of DiliPlate seems to be still in the development stage, but the detailed settings are preset by the elegant siblings, and the store side simply sees the table numbering (shipping instruction) screen on the final set screen easily. The communication between the manager software and the dili plate is said to use the wireless LAN. I asked for security, but I do not get a cool answer (I do not know why, but I’m not even sure what the operating system is. In any case, the central server sends numerical data such as how many tables Dili Plate went to each store every day, but it does not transmit any data that the camera has taken or data that might infringe privacy. Dili Plate is still in the process of upgrading and it can be said that the role itself is a supplementary level that relieves the burden of carrying the food rather than replacing the clerk. It focuses on improving work efficiency rather than replacing labor costs. There is also an event in the voice service, but it can be used for various events through functions such as lighting and music playback at the bottom of the floor.

According to elegant brothers, Dillie Plate will be put into actual stores this year. Robots that can be used for real last mile in the open air may collide with various variables or legal problems, but they are relatively simple, but DiliPlate can be commercialized within a short time.

The elegant brothers, of course, plan to run mid to long term projects for the next five years. The next step is to expand the outdoor environment, including apartment blocks, officetels, and university campuses, to the third level, including general walkways.